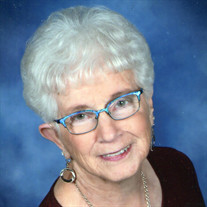 Nancy Jo Bolin, 81, of Gibbon, died Tuesday, July 9, 2019 at Kearney Regional Medical Center. Memorial services will be 10:30 am, July 15, 2019 at the Gibbon Baptist Church with Andy Falk officiating. Burial will be at Riverside Cemetery near Gibbon. Visitation will be from 4:00 to 6:00 pm, July 14, 2019 at the Gibbon Baptist Church. In lieu of flowers memorials are suggested to the family to be designated later. Nancy was born on November 20, 1937 in Denver, CO to Rupert and Zoe (Mayberry) Loewenstein. She graduated from Gibbon High School in 1955. On June 26, 1955, she married Richard “Dick” Bolin at the Gibbon Baptist Church and made their home near Gibbon where they farmed. From 1968 to 1977, they raised their family in Lincoln. They returned to Gibbon to farm and raise cattle. After the loss of Dick in 1996, she continued to serve the Gibbon and Kearney community through volunteering in her church, at the Good Samaritan Hospital and the Good Samaritan Hospice Program. She was on the board of the Gibbon Alumni Association and the Gibbon Education Foundation. She passionately raised money for the new Gibbon High School. She enjoyed traveling with her children, especially to visit her grandchildren and great-grandchildren. She was an active community member and vibrant friend whether at her coffee group, bible study, Red Hats, or Kearney Community Theater. She was a woman of strength and faith. She held many titles in her life most important to her was of wife, mother, grandmother and grandma-great. She is survived by her Daughter, Deb Ruliffson and husband Greg, of Lincoln and their daughter, Ande Golden and husband Lt. Col (USAF) David Golden, of Lincoln, CA and son Lt. Col. (USAF) Richard Ruliffson and wife Sara of Barksdale AFB, LA. Son, Jim Bolin, of Gibbon, his son Justin Bolin and wife Paige of Red Cloud, and his daughter Heather Estes and her husband Luke of Kearney. Son, Dan Bolin and wife, Jan of Lincoln and their children, Brandon Bolin and wife Megan of Lincoln, daughter Danielle Suhr and husband Greg of Eaton, CO and Jessica Johnston and husband Billy of Eaton, CO. She is survived by 15 great-grandchildren. Dessi and Emi Golden, Charlie, Ben and Isaac Ruliffson, Mason and Jake Bolin, Alex and Ashli Estes, Dylan Bolin, Paxton, Natalie and Harrison Suhr and Will and Aspen Johnston. She is preceded in death by her husband, two brothers and a sister, and daughter-in-law, Sue Bolin.

Nancy Jo Bolin, 81, of Gibbon, died Tuesday, July 9, 2019 at Kearney Regional Medical Center. Memorial services will be 10:30 am, July 15, 2019 at the Gibbon Baptist Church with Andy Falk officiating. Burial will be at Riverside Cemetery near... View Obituary & Service Information

The family of Nancy Jo Bolin created this Life Tributes page to make it easy to share your memories.

Send flowers to the Bolin family.