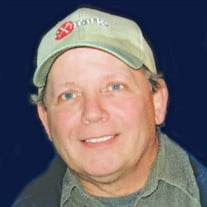 Nick, D. Patsios, 65, died Friday, February 22, 2019, at his home in Kearney, after a short battle with pancreatic cancer. Visitation will be Tuesday, February 26, 2019 from 5:00 to 7:00 pm at Horner Lieske McBride & Kuhl Funeral Home in Kearney, followed by a prayer service. Funeral services will be Wednesday, February 27, 2019 at 10:00 am at Horner Lieske McBride & Kuhl Funeral Home in Kearney followed by burial at Kearney Cemetery. Father Christopher Morris will oﬃciate. In lieu of ﬂowers, the family would suggest Memorials to St. George Orthodox Church, or to the family. Please visit www.hlmkfuneral.com to leave a tribute or message of condolence. Horner Lieske McBride and Kuhl Funeral and Cremation Services of Kearney is in charge of arrangements. Nick was born December 18, 1953 in Kearney to Nick and Betty (McDowell) Patsios. He grew up in Kearney and graduated from Kearney High School in 1972. After living in Las Vegas, NV for several years, he remained in Kearney until his death. Nick worked as a truck driver for Brown Transfer of Kearney, until retiring in July 2016. He shared his passion for cars with his father Nick, brothers Mick and John and countless friends that he inspired by his care and excitement to race cars. He found joy spending time with his family, especially keeping in touch with his sisters, their families and learning about interests that his niece and nephews were involved in, as they were growing up. In his later years he was devoted to the care of his two German shepherds and faithful companions, Willy and Atlas. Surviving relatives include his twin brother, Mick Patsios of Kearney; brother, John Patsios of Kearney and sisters, Joanie Klein and husband Mark and Stephanie Patsios both of Kearney and Nancy Surina and husband John of Reno, NV; nephews Matthew Klein and Shawn Patsios and wife Heidi and children Schylar and Gavin Patsios of Kearney, Justin Surina and wife Brittany of Reno, NV, Jeﬀrey Surina of Las Vegas, NV and niece Jennifer Surina of Reno, NV. Aunts Arlene Patsios and Delores Garrelts both of Kearney, Suzanne Wilson and husband Dennis of Cozad, NE, Karen McDowell of Ravenna, NE as well as numerous cousins and several very dear friends. He was preceded in death by his parents, grandparents Don and Helen Patsios and Raymond and Elizabeth McDowell.

The family of Nick D. Patsios II created this Life Tributes page to make it easy to share your memories.

Send flowers to the Patsios family.