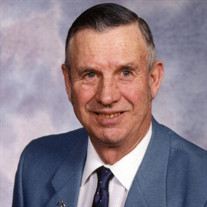 Paul E. Miigerl, 91, of Kearney, died Wednesday, June 6, 2018 at Good Samaritan Center – Prairie View Gardens in Kearney. Mass of Christian burial will be on Monday, June 11, 2018 at 10:30 a.m. at St. James Catholic Church in Kearney. Father Joe Hannappel will celebrate and burial will be at 2:00 p.m. at St. Joseph Cemetery south of Ravenna, NE with military honors. Visitation with family will be on Sunday, June 10, 2018 from 4:00 p.m. – 6:00 p.m. at Horner Lieske McBride & Kuhl Funeral and Cremation Services in Kearney and also 1 hour prior to services at the church on Monday. Memorials are suggested to the family to be designated later. Please visit www.hlmkfuneral.com to leave a tribute or message of condolence. Horner Lieske McBride and Kuhl Funeral and Cremation Services of Kearney is in charge of arrangements. Paul Eugene Miigerl, the son of Aloisus (Louis) Paul and Lillian Clara (Altmaier) Miigerl, was born on December 26, 1926 at the Good Samaritan Hospital in Kearney, Nebraska. His first two homes were in Valley Township upper Buckeye in Buffalo Co. In 1938 he moved with his family, and grew up at his Grandparents, John and Monica (Mihm) Miigerl’s homestead. He was educated at Dist. #49 in upper Buckeye, and graduated from Ravenna High School in 1944. He entered the Army in 1945, and served in the Occupational Forces in Nurnberg, Germany as a World War II Veteran. He earned a Victory Medal, a Good Conduct Medal, a Rifle Award, was issued a Label Button, received an Army Occupation Ribbon in Germany, and his highest grade held was Tec.5. He was honorably discharged September 15, 1946. Paul Eugene Miigerl married Adella Elizabeth Vacek on August 17, 1949 at St. Wenceslaus Catholic Church, south of Ravenna. They lived on a farm in Valley Township, SW of Ravenna. To this union four daughters were born, Patricia Marie, Linda Louise, Roberta Ann and Paula Rene. Paul was a member of the VFW Auxiliary Post 5820 in Ravenna. He served as Valley Township Treasurer, from 1973 to 1978. He also was on the Parish Council and Building committee at St. Mary’s Prairie Center. He farmed and was a livestock producer all his life. He was an avid bowler for many years. He enjoyed woodworking, making many things for his family. He went fishing, had a big weed free garden, played cards with his friends and made a lot of potato soup, banana bread and cookies. Paul and Adella retired in January 1989 and on December 29, 2012 they moved to Regency Retirement Residence in Kearney, Ne. Paul moved to Prairie View Gardens in February 2017. Survivors include his loving wife, Adella of Kearney; daughters Patricia Kieborz and husband Rodney of Litchfield Ne., Roberta Paitz and husband Patrick of Gibbon, Ne., Paula Albright and husband David of Kearney, Ne.; Son-in-law Daniel Pokorney of La Grande, OR; Nine Grandchildren, Jason Pokorney and wife Marci of Meridian, ID, Shane Kieborz, and Lance Kieborz of Gibbon, Ne., Michael Paitz and wife Jennifer of Henderson, Ne., Angela Baker and husband Corey of Omaha, Ne., Heather Rosenthal and husband Joe of Omaha, Ne., DaLyn Anderson and husband Destry of Couer D’Alene, ID., Logan Albright and wife Annie of Kearney, NE., and Lauren Stadler and husband Riley of Minden, NE; Seven great grandchildren, Delaney Pokorney, Kayley Paitz, Mason and Kayden Albright, Brixten Stadler, Levi and Autumn Baker. Paul was preceded in death by his parents, brother James LeRoy Miigerl, daughter Linda Pokorney and twin granddaughter Diedra Pokorney.

The family of Paul E. Miigerl created this Life Tributes page to make it easy to share your memories.

Send flowers to the Miigerl family.