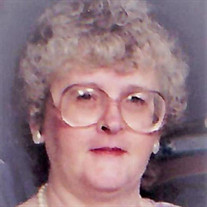 Phyllis J. Eckhoff, age 85, of Kearney, passed away Tuesday, November 16, 2021 at Mother Hull Home in Kearney. Funeral services will be 10:30 a.m, Tuesday, November 30, 2021 at Horner Lieske McBride & Kuhl Funeral Home with Dean Pofahl officiating. Burial will follow at the Shelton Cemetery. Visitation will be an hour prior to services. Memorials may be made to the family to be designated later. Please visit www.hlmkfuneral.com to leave a tribute or message of condolence. Horner Lieske McBride and Kuhl Funeral and Cremation Services in Kearney is in charge of arrangements. Phyllis was born on October 17th, 1936 in Shelton, NE to Hubert and Francis Orth. She was raised by her aunt Jessie. She married Bob Eckhoff in 1953. Bob and Phyllis were blessed with six boys. Tragically losing her youngest son Robbie at age 3, a sadness she carried with her the rest of her life. Phyllis was a huge Elvis fan, attending a live concert in Lincoln in 1956. Phyllis ran her own café while living in Miller, The Hungry Farmer. Later joining Baldwin Filters in Kearney where she was proud to be able to buy her own home. She spent the majority for her working years working in the food service industry. Surviving relatives include her brother David and sister Faith; her sons Ken, Steve, Jeff, Dan and Tim; her grandchildren, Andrea, Todd, Robert, Alexa, Carissa and Anna; and her great grandchildren, Logan and Brenna. Phyllis was preceded in death by her parents, aunt Jessie, her sister Loice, her son Robbie and grandson Mathew.

The family of Phyllis J. Eckhoff created this Life Tributes page to make it easy to share your memories.

Send flowers to the Eckhoff family.