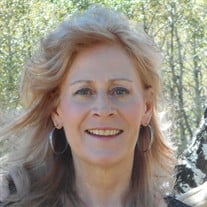 Ramona “Mona” K. Pickering, age 63, of Kearney died on Thursday, September 12, 2019 at CHI Health - Good Samaritan Hospital in Kearney. Family Memorial Services will be at a later date. Please visit www.hlmkfuneral.com to leave a tribute or message of condolence. Horner Lieske McBride & Kuhl Funeral and Cremation Services in Kearney are in charge of arrangements. Mona was born on August 13, 1956 in Denver, CO to Charles G. and Geraldine M. (O’Day) Johnson. She attended South High School in Denver and graduated with the class of 1975. She was united in marriage to Ronald D. Pickering on November 4, 1981 in Golden, CO. Mona was employed as the school secretary at Windy Hills School in Kearney for over 25 years. She developed numerous friendships and touched countless lives of faculty, staff, parents and students throughout her career. Her family often heard of instances where children enjoyed attending school because of Mona’s warm, kind and caring personality. She will also be fondly remembered for her amazing cooking. Surviving relatives include her husband, Ron of Kearney, NE; parents, Charles and Geri Johnson of Waynesville, NC; siblings, Lori Johnson of Arvada, CO, Rock and Vanessa Johnson of Conifer, CO, Genna Wissman of Littleton, CO; uncles, Danny and Linda O’Day of Brighton, CO and David and Amy Johnson of Murphy, NC; numerous other family members and a host of friends and colleagues.

The family of Ramona "Mona" K. Pickering created this Life Tributes page to make it easy to share your memories.

Send flowers to the Pickering family.