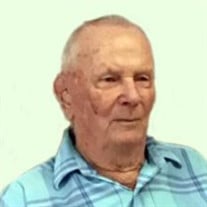 Raymond E. Hazzard, age 92, of Miller, passed away Friday, October 16, 2020 at his son’s residence in Mitchell, NE. Graveside Services will be on Wednesday, October 21, 2020 at 3:30 p.m. at the Armada Cemetery in Miller, NE. Rev. Dean Pofahl will officiate. Military rites will be provided at graveside. Visitation will be prior to services on Wednesday at Horner Lieske McBride & Kuhl Funeral and Cremation Services in Kearney from 1:00 p.m. – 3:00 p.m. Memorials are suggested to the American Cancer Society. Please visit www.hlmkfuneral.com to leave a tribute or message of condolence. Horner Lieske McBride and Kuhl Funeral and Cremation Services are in charge of arrangements. Raymond was born on January 14, 1928 north of Miller, NE to Raymond Ellsworth and Alice (Osborn) Hazzard. He attended Wild Horse County School before joining the Air Force in 1950. Raymond proudly served his country while stationed in a variety of locations including Hawaii, Chicago, Denver, Libya, and California. He saw active duty during the Korean and Vietnam Wars and eventually retired from the Air Force after a 20 year career. Raymond married Carolyn E. Williams on November 15, 1952 in Elm Creek, NE. The couple were blessed with five children, Debra, Patti, Edwin, James and Russell. After his military career, Raymond and Carolyn moved to the Miller, NE area where Raymond farmed and later worked at Eaton’s in Kearney until his retirement in 1990. Surviving relatives include his children, Debra and Art Thompson of Lincoln, NE, Patti and Dan Lee of Elsie, NE, Edwin and Rhonda Hazzard of Mitchell, NE, James and Yenni Hazzard of Lincoln, NE and Russell Hazzard of Highlands Ranch, CO; sister, Hazel Strickler of Plattsmouth, NE; sisters in law, Marlyn Hazzard of Broomfield, CO and Geri Hazzard of Kearney; 9 Grandchildren; 13Great Grandchildren; numerous nieces, nephews and other extended family. Raymond was preceded in death by his wife, Carolyn in 2008; 3 sisters, Roslyn, Lois and Ruth; 4 brothers, Bernard, Kenneth, Walter and Harley; 1 grandson, Jared Lee The family wishes to express its gratitude to Ed and Rhonda Hazzard and their family for their care of Dad.

The family of Raymond E. Hazzard created this Life Tributes page to make it easy to share your memories.

Send flowers to the Hazzard family.