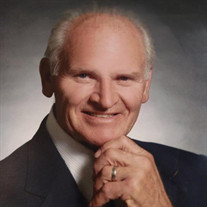 Reverend Donald E. Bennett, age 89, of Kearney, passed away Sunday, January 30, 2022 at Mount Carmel Home Keens Memorial. A small visitation will be held from 3-5pm Saturday February 5th, 2022, at Bennett’s Taekwondo located at 1220 Central Ave in Kearney with the family. At Don’s request a private family graveside service will be held at a later date. Memorials are suggested to Don’s son, Tim Bennett, to be designated at a later time. Horner Lieske McBride and Kuhl Funeral and Cremation Services in Kearney are in charge of arrangements. Don was born on February 2nd,1932 in Moorhead, MN (Ground Hog Day) to Edwin and Mildred (Evrin) Bennett. Don attended Moorhead High School and Graduated in 1950. Don was an Extraordinary athlete who lettered in four sports, those being Football, Basketball, Hockey and Track & Field. After High School, he attended college at North Dakota University where he again lettered in Football, Gymnastics, and Diving. He graduated with a Master’s Degree in teaching. During this time, he met and married Margaret and from this union they had four boys. Later on, they moved to Chicago, IL where he went on to attend McCormick Seminary School and became a Reverend. He spoke French and studied Hebrew. Don became a Reverend of a Presbyterian Church and Ministered in Rushville, Gibbon and in Wood River Nebraska. They later divorced. In 1974 Don moved to Colorado where he Ministered. He married Jay in 1977. She later passed. Don showed horses for most of his life which also included breaking and training them. He was also an EMT for many years and a boy scout leader and camped throughout the states as he loved to travel. Don also played softball well into his 60’s and made lots of homeruns. He was very active in sports. He also loved hiking in the mountains, traveling to Alaska, Hawaii and Turkey. Don met many people along the way, and he loved to show them his Donald Duck impersonations, which the kids enjoyed. He spent his life making and keeping meaningful friendships from his congregation and all the people he met along the way. Left to remember Don are his sister Shirley of Northfield, MN, his four sons, 12 grandkids, 24 great grandkids, and 4 great great grandkids. Don was preceded in death by his wives, parents, 2 brothers, and a sister.

The family of Reverend Donald E. Bennett created this Life Tributes page to make it easy to share your memories.

Send flowers to the Bennett family.