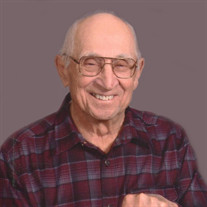 Rex R. Hand, age 88, of Kearney, passed away Sunday, June 27, 2021, at his home surrounded by his family. Funeral services will be 2:30 pm, Wednesday, June 30, 2021, at Grace Lutheran Church in Pleasanton with Pastor Dean Hanson officiating. Burial will follow the service at the Pleasanton Cemetery with military honors graveside. Visitation will be from 5:00 pm to 7:00 pm, Tuesday, June 29, 2021, with the family greeting friends at Horner Lieske McBride & Kuhl Funeral and Cremation services. In lieu of flowers memorials are suggested to the family to be designated later. Rex was born in Pleasanton, NE on July 12, 1932, to Raymond and Julia (Klein) Hand. He attended school in Pleasanton until February 1951 at which time he enlisted in the Army. He was stationed in Anchorage, Alaska. On May 21, 1953, Rex and Betty Rolfsmeyer were joined in marriage in Kearney. To this union a son and three daughters were born. Upon returning from the service, Rex joined his father in the well drilling business. They resided in Pleasanton until 1966, at which time he, the family and the business moved six miles south of Pleasanton. Rex became the owner of Hand Well Company in 1973 and retired from the business in 2008. With retirement in 2010, Rex and Betty moved to Kearney. He was in Brookstone Gardens from January 2020 to November 2020 when he moved into his daughter and son-in-law’s home north of Kearney. Rex joined the Pleasanton Fire Department when he was 16 and remained active until 1966. He was a lifetime member of the American Legion, past member of the Kearney Elk’s Club, Nebraska Well Drillers Association from 1951 to 2008, Suburban Fire Board for Buffalo County from 1998 to 2018, and Town and Country Bank board from 1973 to 2018. Rex worked hard and played even harder. He did not know the word no. When asked to do something for someone, it was considered done and it was done right if not better. He was always ready to lend a helping hand. He loved hunting and fishing and socializing with his friends. He was a fun-loving guy and always out to have a good time while making sure that everyone else had a good time too. Rex is survived by his daughters, Connie (Lymon) Reiss of Kearney, Darla (Leland) Skeen of Gibbon, Gisel (Dave) Krueger of Kearney; son, Dave (Terry) Hand of Kearney; 14 grandchildren; 11 great grandchildren; brother Norman of Kearney; sisters-in-law JoAnne and Rita Rolfsmeyer; many cousins; nieces; nephews and friends. He was preceded in death by his parents; wife Betty; brother-in-law Allen Rolfsmeyer; sister-in-law June Hand; and son-in-law Monty Warnken.

The family of Rex R. Hand created this Life Tributes page to make it easy to share your memories.

Send flowers to the Hand family.