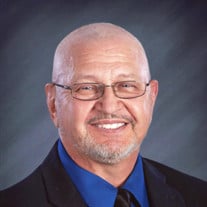 Richard ‘Dick’ Wayne Collins, age 73, of Kearney, passed away peacefully Tuesday, January 19, 2021 at Kearney Regional Medical Center due to complications of COVID-19. Memorial services will be 10:00 a.m., Monday, January 25, 2021 at Living Faith Fellowship Church in Kearney with Pastor Paul Stachura officiating. Due to COVID-19 restrictions and social distancing requirements, the maximum capacity for the church will be 250 people. The service will be available online to watch on the livingfaithfellowshipkearney Facebook page. Interment will take place at a later date at Fort McPherson National Cemetery with military honors graveside. Visitation will be 3:00 p.m. to 5:00 p.m., Sunday, January 24, 2021 at Horner Lieske McBride & Kuhl Funeral Home. A memorial has been established to the Living Faith Fellowship Church or the NU Foundation in creation of Dick Collins Memorial Scholarship at UNK. If the scholarship is chosen, please make the check to NU Foundation and include Dick Collins Memorial on the memo line. Horner Lieske McBride & Kuhl Funeral and Cremation Services are in charge of arrangements. Dick was born November 11, 1947 in Broken Bow, Nebraska as an only child to Wayne Wallace and Mabel Margaret Collins. Dick’s family moved to Ord, Nebraska while in 2nd grade and Dick graduated from Ord in 1966. He married the love of his life, Shirley L. Johnson on July 12, 2014 after many years of bachelorhood. They loved attending UNK functions, their Church, Living Fellowship, and being with family and friends. Dick was the Equipment Manager at UNK for 38 years (1976-2013) he mentored many student and athletes. His ability to listen, talk and remember each name was a gift. He loved everything about sports and rarely missed a game before and after his retirement in 2013. He began his career as a student assistant in 1967, before heading to the US Navy. He returned to UNK in 1975 and graduating a year later with a BS Degree in Recreation, he was responsible for outfitting all Loper teams, which numbered 10 when he began at then-Kearney State. With the advent of women’s sports, the number then grew to 17. On September 27, 2015 he was inducted into the University of Nebraska Kearney Athletic Hall of Fame. He was a member of the Athletic Equipment Manager’s Association (AEMA) since its inception in 1976 and after 38 years he became a lifetime member. In 1990, he helped design the current equipment room now housed on the ground floor of the Health and Sports Center, where you will see the dedication plaque in his name. He was so honored and proud. Dick loved his sweets, candy and Diet Dr Pepper! He loved to share his goodies with anyone that would stop by to visit. He would always stock everyone’s favorite! His life was a living example of his Love of the Lord, he prayed EVERY single day in his Prayer Room, he read the Bible to Shirley every night, therefore, read it to its entirety at least 3 times. As of late, he would read books to Shirley and once in a while, while reading, you would see a tear slide down his face, he was so tenderhearted. Dick is survived by his wife, Shirley, 3 stepchildren (whom he claimed as his own) daughter Cindy and her husband Kim Johnson - Wilcox, Scott and his wife Kathy Johnson - Kearney and Brad and his wife Diane Johnson - Omaha, 9 Grandchildren and 13 Great Grandchildren. Brothers Rick Dunbar and his wife Chris - Eustis, Nick Aquino and his wife Malena - Maryland, Sisters Bev Cook and her husband Gene - Lincoln, Janice Kooiker and her husband Clayton - Le Mars, IA, JoAnne Dunbar - Lincoln, Nephews Dave Runge and his wife Rhea - Yankton, Paul Runge and his Wife Carol - Colorado, Niece Sally Runge - North Platte, Great Nephew Sean Runge and his wife Patty - Lincoln, Great Great Nephew Jacob Runge and his wife Courtney - Omaha, Great Great Niece Ashley Runge - Kearney and many many others whom he loved dearly. As Dick would say “GO LOPERS” - please feel free to honor him by wearing UNK Lopers Attire!!

The family of Richard 'Dick' W. Collins created this Life Tributes page to make it easy to share your memories.

Send flowers to the Collins family.