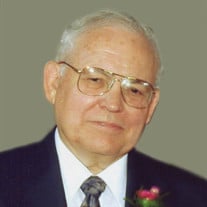 Richard G. Headley, age 83 of Kearney, died on Wednesday, April 11, 2018 at CHI Health - Good Samaritan Hospital in Kearney. Services will be on Tuesday, April 17, 2018 at 2:00 p.m. at The Church of The Nazarene in Kearney. Pastor Trent Johnson will officiate and burial will be at Kearney Cemetery. Visitation will be on Monday, April 16, 2018 from 6:00 p.m. – 8:00 p.m. at Horner Lieske McBride & Kuhl Funeral and Cremation Services in Kearney and also 1 hour prior to services at the church on Tuesday. Memorials are suggested to the Church of the Nazarene or Mother Hull Home. Please visit www.hlmkfuneral.com to leave a tribute or message of condolence. Horner Lieske McBride & Kuhl Funeral and Cremation Services are in charge of arrangements. Richard was born on April 15, 1934 in Oconto, NE to Glen and Myrtle (Garringer) Headley. He was raised in Louisville, NE and was a graduate of Louisville High School in 1951. He then attended Central College in McPherson, KS and later Bethel College in Mishawaka, IN where he received his bachelors degree in business administration. Richard served his country as a member of the United States Air Force from 1954-1958. He married Constance “Connie” M. Arnold on September 5, 1959 in Weeping Water, NE. They made their home in Omaha and in 1972 moved to Beaver City. They moved to Kearney in 1975. Connie passed away in 1999 after nearly 40 years of marriage. He married Violet J. Miller on June 12, 2000 in Kearney at the Church of the Nazarene. Richard was employed by a number of businesses as an accountant throughout his career. He was also an ordained minister and pastored at churches in Weeping Water, Beaver City and Kearney. From 1978 to 1986, Richard was employed as the administrator at Mother Hull Nursing Home in Kearney. During his tenure, he started a weekly sing-along and bible study on Friday mornings for the residents; a tradition that continued for over 30 years, long after his retirement. Richard had a passion for music and enjoyed ministering through worship and song at churches, hospitals and retirement homes. He had a wonderful singing voice and was extremely talented musically; playing the guitar, harmonica and keyboard. Due to failing health, Richard became a resident at Mother Hull Home in December of 2016. He continued to entertain and minister to the other residents through his music up until his death. Surviving relatives include his wife, Violet of Kearney; sons, Douglas Headley of Kearney, David Headley of Kearney and Richard B. Headley of McCook; brothers, Donald (Jean) Headley of Lakewood, CO and Dwight (Beverly) Headley of Ft. Calhoun, NE; 4 step-children; 11 step-grandchildren; 8 step-great grandchildren; numerous other extended family and friends. Richard was preceded in death by his parents; first wife, Constance “Connie” M. Headley;

Richard G. Headley, age 83 of Kearney, died on Wednesday, April 11, 2018 at CHI Health - Good Samaritan Hospital in Kearney. Services will be on Tuesday, April 17, 2018 at 2:00 p.m. at The Church of The Nazarene in Kearney. Pastor Trent Johnson... View Obituary & Service Information

The family of Richard G. Headley created this Life Tributes page to make it easy to share your memories.

Send flowers to the Headley family.