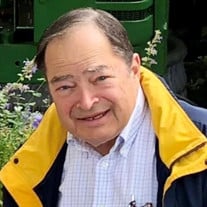 Richard Frederick Kauders, 74, of Kearney, died Wednesday, November 17, 2021 at CHI Health – Good Samaritan Hospital in Kearney. Memorial services are scheduled for Sunday November 21, 3pm Central Time at St. Luke’s Episcopal Church in Kearney with live streaming at the church’s YouTube channel https://www.youtube.com/channel/UCnFQzviPt3NQusFTaeQ84Aw Mother Stephanie Swinnea will officiate and the inurnment will be at the St. Luke’s Church Columbarium. There will be no visitation. Memorials in lieu of flowers are suggested to St. Luke’s Episcopal Church (donations may be made at www.stlukes-kearney.com/home). Please visit www.hlmkfuneral.com to leave a tribute or message of condolence. Horner Lieske McBride and Kuhl Funeral and Cremation Services in Kearney are in charge of arrangements. Richard was born on January 6, 1947 in Salem, Massachusetts to Frederick and Anita Hayekova Kauders. He was raised in Beverly Farms, Massachusetts; at-tended Shore Country Day School, Beverly, Massachusetts; prep school at St. Paul’s School, Concord, New Hampshire; Cornell University, Ithaca, New York where he received his bachelor’s degree in 1969; and Northwestern University, Evanston, Illinois where he received his MBA in 1972. He then moved to Omaha Nebraska to join Union Pacific Railroad where he worked for 29 years, primarily in the finance area. Richard met Audrey (Snorsky) Gryder when both joined the Omaha Ballet Board in 1980, and they were married on November 7, 1981 in Omaha, Nebraska. When Richard was in isolation at the hospital, he and Audrey marked their 40th wedding anniversary. In 2002 Richard and Audrey moved to Kearney, Nebraska where Richard continued to enjoy his retirement and Audrey became Director of the Museum of Nebraska Art (MONA). In Kearney Richard joined St. Luke’s Episcopal Church and was a member of the vestry and very active with the Episcopal Diocese of Nebraska. He was also involved with the Kearney Noon Rotary, Kearney Concert Association, and Senior College of Central Nebraska. Richard was known for his dry wit and generous spirit. He was a major supporter of the arts, participating on the Friends of Art Board for over three decades. He also served as President of the Omaha Symphony Board of Directors. He continued his relationship with Delta Chi Fraternity and served on the Cornell Chapter Housing committee at the time of his death. He was a lifelong collector of art, he commissioned a chamber orchestra piece in honor of their 5th wedding anniversary, and was an active volunteer at MONA. Surviving relatives include his wife, Audrey S. Kauders of Kearney; sister Debbie and husband Dr. Steve Spangler, Boston; son Chris Gryder and wife Sheila Guarnagia, Roanoke, Virginia; daughter Roxanne Gryder and husband Stephen Balogh, Portland, Oregon; grandchildren Rowan Gryder, Charleston, South Carolina; Chelsea, Kaitlyn, and Nicholas Balogh, Portland; nieces Heather, Rebecca, Carrie, and Bailey Spangler; great nephew Shane Thomas; step-sisters Dr. Lisa Crockett and Phyllis Gallagher; and numerous Kauders/Leonard cousins and their families. Richard was preceded in death by his parents, step-mothers Connie Hodges Kauders and Pippa Crockett Kauders.

The family of Richard F. Kauders created this Life Tributes page to make it easy to share your memories.

Send flowers to the Kauders family.