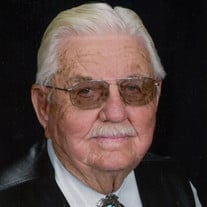 Robert “Bob” V. Cruise, 98 of Kearney formerly of Pleasanton, died November 27, 2019 at Mt. Carmel Rehabilitation and Nursing Home in Kearney. Memorial services will be 11:00 a.m., December 5, 2019 at the First United Methodist Church with Rev. Melody Adams officiating. Private family burial will be held later. Memorials are suggested to Pleasanton Volunteer Fire Department. Robert “Bob” V. Cruise was born September 7, 1921 at the family home six miles south of Pleasanton, Nebraska to Ray and Wilma (Day) Cruise. He was the oldest of two sons. He attended Mount Pleasant Rural School which was located near his home. In the fall of 1934, he started high school in Kearney staying with his grandparents. The following year he stayed home and worked on the farm. Then the next fall he started school at Pleasanton and graduated in 1939. On June 15, 1941 Bob married Alice N. Dorothy. They eloped to Kansas and kept their marriage a secret until later that summer. Eventually, they told their parents and they helped them get started with a small house and simple furnishings. It was a modest beginning to a marriage that would last 78 years. Bob and Alice were blessed with four children. Karen, JoAnne, Ronald, and Randy. Bob was a lifetime resident of Buffalo County and had a passion for farming, machinery, and designing and building projects from steel. He also drilled over 400 irrigation wells in the area from 1954 to 1960. He was a 4-H leader and served a number of years on the school board. He was active in the Lions Club where he served many positions including District Governor and was on the Cedar township board for many years. He was a member of the First United Methodist Church of Kearney. He was avid collector of farm toys and enjoyed attending toy and antique shows and sales. Left to cherish his memory are his wife Alice Cruise of Pleasanton; children, Karen Crookshank of Loveland, CO, JoAnne Unick and husband Ken, Ron Cruise and wife Peggy all of Pleasanton, NE, Randy Cruise and wife Debra of Kearney, NE; grandchildren, Cammie Spence, Craig Crookshank, Cindy Bender and husband Roger, Christine Jenson and husband James all of Colorado; Michael Unick and wife Julie, Rory Cruise and wife Anna, Megan Mayo and husband Brett, Justin Cruise and wife Heather, Kyle Cruise and wife Lindsay all of Pleasanton, NE; Jon Unick and significant other Paige Arnold, Amanda Albers and husband Shane, Nicholas Cruise and wife Aubrey all of Kearney, NE; Charity Kuehn and husband Joseph, Eric Cruise and wife Jenessa all of Lincoln, NE; Holli Zuck and husband Chip of Mission Hills, KS, Jennifer Smith and husband Brad of Waunakee, WI; 42 great grandchildren; brother, Warren Cruise of Centennial, CO; sister-in-law Irene Newman of Kearney, NE; numerous nieces, nephews, other relatives, and friends. Bob was preceded in death by his sisters-in-law, Connie Cruise and Betty Dorothy; brothers-in-law, Ray Dorothy and Harold Newman; son-in-law, Fenton Crookshank; one granddaughter, Cathleen Crookshank; and two great granddaughters, Lucy Cruise and Cecilia Mayo.

The family of Robert "Bob" V. Cruise created this Life Tributes page to make it easy to share your memories.

Send flowers to the Cruise family.