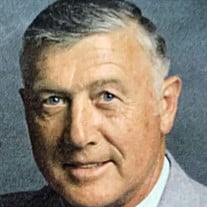 Robert "R.D." “Bob” "Coach" D. Hauver, age 94, of Kearney, passed away Friday, May 7, 2021 at his home. Funeral services will be 1:30 p.m., May 17, 2021 at the First United Methodist Church with Pastor Melody Adams and Pastor Bob Gannon officiating. Burial with Military Honors provided by the United States Navy Funeral Honors Team, Kearney American Legion Post #52, Kearney V.F.W. Post #759 will follow the service at the Kearney Cemetery. Memorials are suggested to the family to be designated later. Bob was born May 17, 1926 in Kearney to John and Mabel (Dye) Hauver. He graduated from Kearney High School. Bob joined the Navy in October of 1944 serving as a radioman on the PEC ® 852 in the Pacific and Atlantic Oceans. After the Navy, Bob attended Nebraska State Teachers College, (now UNK) where he was one of the most recognized athletes during the post WWII years. He was a 3-sport letterman for each of his four years, excelling in football, track and basketball. In football, along with his four letters, he earned All-Nebraska College Conference honors his junior and senior seasons as a running back. He was team captain in 1948. In the 1948 yearbook it states, “Hauver was the workhorse of Kearney backfield with his hard running, passing and as a signal caller.” Bob also excelled in basketball and track. He is still one of the most versatile track athletes in school history. He captained the1949 track team where he competed in the 100,200,440,880 and mile as well as being a key member of the relay teams and was the team’s top shot putter. Following his college career, he spent almost 40 years teaching and coaching at the high school and college levels in track, football, and basketball. He started and was the first coach of the KSC wrestling program. He retired in 1988 as the head men’s indoor, outdoor track and cross country coach. Hauver was president of the NAIA (National Association of Intercollegiate Athletics) Track and Field Coaches Association. He was the first member of the NAIA Hall of Fame to be inducted as both an athlete and a coach. Bob was inducted in the UNK Hall of Fame in 1983, and the Nebraska Football Hall of Fame in 1995. On June 5,2021 Bob will be inducted into the inaugural Plainview High School Hall of Fame, recognizing his championship seasons. Bob married Frances Chambers on March 29,1949 in Kearney. They were married 72 years. He was a member of the First United Methodist Church, the B.P.O Elks, a 32nd degree Mason, a member of the Rob Morris Lodge, Scottish Rite, Fort Kearny Shrine Club; Kearney Cosmopolitan Club, Kearney American Legion, Kearney V.F.W., and helped with Special Olympics and the Boy Scouts. Bob is survived by his wife Frances Hauver of Kearney; daughters, Franny (Tom) Madsen of Kearney, Cindy (Jerry) Foote of Kearney, Becky (Charlie) Huggins of Wasilla, Alaska; Peggy (Dudley) Benson of Axtell, son, Rich (Mona) Hauver of Lansing, KS. Grandchildren: Mark Richardson, Erik (Mary Kate) Richardson, Dr. Ryan (Trisha) Foote, Adam (Lori) Foote, Kevin (Robyn) Foote, MAJ Chad (Sasha) Huggins, Hallie (Ben) Johnston, Cody (CPT Bonnie) Huggins, Brady (Ashley) Benson, Brandon Benson, Megan (Mike) Seebeck, Jessica (Thomas) McIntyre, Abby Hauver, Bobby Hauver, Elle (Andy) Linafelter; 27 great grandchildren; along with cousins, nieces, and nephews. Bob was preceded in death by his son, Robert D. Hauver Jr.; sisters, Darlene Butoph, Evelyn Zehr; brothers, Dell Hauver, and William Knaggs.

The family of Robert "R.D." "Bob" "Coach" D. Hauver created this Life Tributes page to make it easy to share your memories.

Send flowers to the Hauver family.