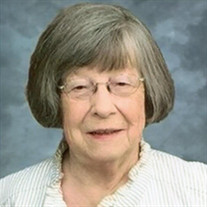 Roberta ‘Bobbie’ Jean McKenzie, age 85, of Kearney, passed away Sunday, February 13, 2022 at Good Samaritan Society St. John’s in Kearney. Memorial services will be at a later date. Memorials are suggested to the University of Nebraska Foundation, Bobbie McKenzie Scholarship Fund. Horner Lieske McBride & Kuhl Funeral and Cremation Services is in charge of arrangements. Roberta Jean "Bobbie" Holt McKenzie was born August 24, 1936 in West Point, Ne, the eldest child born to Dorothy and Robert Holt. Her childhood years were spent primarily in West Point and Blair. She graduated Blair High School in Blair, NE. in 1952. She attended University of Nebraska, earning her bachelor’s degree in 1956. She also attended the University of Minnesota in Minneapolis. She married Donald McKenzie of Alma on July 21,1960. They restored and lived in their Pioneer neighborhood home for 48 years. Bobbie was a devoted wife and mother. Her children, Sandi and Kirk, were blessed with a mother who was loving, creative and perpetually involved in school extra-curricular activities, sports, Camp Fire Girls and Boy Scouts. She taught English and journalism at Kearney High School for 11 years and served as faculty advisor of the Quill and Scroll, LOG yearbook and ECHO newspaper. She continued her education earning her master’s degree in education in 1976 from Kearney State and taught Photojournalism and Advertising at Kearney State College until she retired in 1996 after serving over 38 years teaching in the Kearney community. She was the recipient of many teaching awards and had a particular reputation for challenging students. Bobbie served tirelessly the Chi Omega sorority, PEO, DAR, the Frank House, Trolley, the United Way as well as neighborhood/Pioneer Neighborhood preservation committees. Her passion for family history and genealogy found her devoting hours of pain staking research and logging thousands of miles compiling, contributing and authoring books on the Boyer, Holt, Bystrom, and McKenzie lineages. Her green thumb resulted in not only beautiful houseplants, but thriving forsythia, lilac, pussy willow and peonies she enjoyed so much. TGIF, potluck, birthday groups were always looked forward to. Bobbie is survived by her husband Donald of Kearney; her daughter Sandi of Charleston, SC; granddaughter Kari and her husband Robert Griffin of Columbia SC; her great grandchildren Elizabeth, Robert and Ada; granddaughter Molly and her husband Timothy Tate of Colorado Springs CO; and granddaughter Sarah Jones of Charleston SC; her son Kirk McKenzie and his wife, Nicky of Kearney, NE. She is survived also by her sister Patricia of Madrid, Spain, sister Mary of Phoenix, AZ, sister Lynnea of Phoenix, AZ and brother Kerry of Phoenix, AZ. She was preceded in death by her father Robert Holt, her mother Dorothy Boyer Holt Wangberg and her stepfather Stanley Wangberg.

The family of Roberta 'Bobbie' J. McKenzie created this Life Tributes page to make it easy to share your memories.

Send flowers to the McKenzie family.