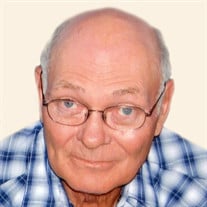 Roger A. Bartels, 80, of Kearney, died Thursday, October 1, 2020 at Mt. Carmel Home and Rehabilitation Center. Funeral services will be held 10:30 a.m., October 6, 2020 at Horner Lieske McBride & Kuhl Funeral and cremation Service with Pastor John Coppernoll officiating. Burial with military rites provided by the Nebraska National Guard Funeral Honors Team, Kearney American Legion Post #52, and Kearney V.F.W. Post #759 at Kearney Cemetery will follow the service. Visitation will be from 5:00 to 7:00 pm, October 5, 2020 at the funeral home and one hour prior to the service. Memorials are suggested to the family to be designated later. Roger was born March 29, 1940 at Kearney County Health Services in Minden to Rudolph and Esther (Sinnen) Bartels of rural Upland, Nebraska. He was baptized in 1940 and confirmed in 1954 at Zion Lutheran Church in Upland. He was a member of the Open Door Fellowship Church in Gibbon. He enjoyed serving the Lord and working in the Godmobile. Roger attended three rural grade schools east of Macon and graduated from Upland High School in 1957. He attended UNL and also Hastings Community College. He farmed from 1958 to 1976 on his parent’s farm then went on to serve his country in the Army from January 1961 to November 1962. Following his honorable discharge from the Army, Roger started his own truck driving company until his retirement in 2017. Roger married Linda on December 9, 2005 in Heartwell, Nebraska. His hobbies included turkey hunting, fishing, and coffee with the guys. He also enjoyed spending time with his grandchildren and watching them play sports. Roger is survived by his wife Linda Bartels of Kearney; sons, Adam Bartels of Yutan, NE, Dean and Beckie Chamberlin of Kearney; daughters, Sue and Kyle Simodynes of Kearney, Stephanie and Ron Bogus of Elm Creek, NE, grandchildren, Drew, Amiya, Marisa, and Aleah Chamberlin, Joie Bartels, Kellen Simodynes; brother, Dean Bartels of Lakewood, CO, sister, Alyson and Mark Morris of Hildreth, NE, and many nieces and nephews. Roger was preceded in death by his parents, brother Neil Bartels, and sister Ardyce Fritson.

The family of Roger A. Bartels created this Life Tributes page to make it easy to share your memories.

Send flowers to the Bartels family.