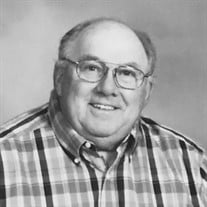 Ron C. Blessing, 72, of Kearney, died on Wednesday, March 2, 2022 at CHI Health Good Samaritan Hospital in Kearney. Memorial services will be on Wednesday, March 9, 2022 at 1:00 p.m. at the Kearney E-Free Church. Pastor Kent Sundberg will officiate and burial will be at the Kearney Cemetery. Visitation with family greeting friends will be on Tuesday, March 8, 2022 from 5:00 p.m. – 7:00 p.m. at Horner Lieske McBride & Kuhl Funeral and Cremation Services in Kearney. In lieu of flowers, memorials are suggested to the Kearney Area Animal Shelter, the Kearney Police and Fire Departments, the UNK Wrestling Program or to the Blessing family to be designated later. To leave a tribute or message of condolences please visit www.hlmkfuneral.com. Horner Lieske McBride & Kuhl Funeral and Cremation Services is in charge of arrangements. Ron was born on October 22, 1949 in Salina, KS to Jack B. and Carolyn R. (Currie) Blessing. He attended Kearney High School and graduated with the class of 1967. After high school, Ron attended Kearney State College where he earned a bachelor’s degree. He was an active member of the Phi Delta Theta Fraternity while attending Kearney State. He married Pamela Ball on November 15, 2008 in Kearney. Ron founded Blessing Construction in 1998 and provided concrete construction services in the Kearney, Grand Island, Lexington, and surrounding areas. Community was of upmost importance to Ron. He was known to give his time to many causes including the memorials mentioned above, UNK athletics, the Frank House, and numerous local construction projects supporting future generations. Ron was passionate about a variety of subjects. He enjoyed current events, had a unique love for Victorian antiques, all kinds of music, and politics. He would be happy to discuss his conservative views in an educational manner. Ron loved animals – to say his dogs and cats will miss him would be an understatement, and we are sure the feeling would be mutual. Ron cared deeply for his family, including his Blessing Construction family. Ron held true to his convictions and morals. He made sure people understood faith and hope in God should always be part of an individual’s foundation. Ron is survived by his wife, Pam of Kearney; daughters, Mindy Bohn and her husband Timothy of Lancaster, OH and Brooke Blessing and her husband Shad Martin of Loveland, CO; brother, Scott (Bobbi) Blessing of Alma, NE; sister-in-law, Julie Blessing of Ogallala; mother in law, Bonny Ball of Kearney, sisters in law, Holly (Steve) Curtiss of Doniphan, Peggy (Donnie) Mak of Kearney, and brother in law, Alan (Sue) Ball of Highlands Ranch, CO; 7 grandchildren; numerous other extended family, friends and many loyal employees than Ron considered family. He was preceded in death by his parents; son, Joshua Ryan Blessing; brother, Randy Blessing

The family of Ron C. Blessing created this Life Tributes page to make it easy to share your memories.

Send flowers to the Blessing family.