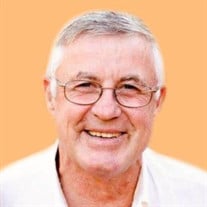 Ron J. Fitzgerald, 71, of Kearney, passed away Saturday, May 9, 2020 at Kearney Regional Medical Center. Memorial Mass will be held at 3:00 p.m., Thursday, October 8, 2020 at St. James Catholic Church with Fr. Joseph Hannappel officiating. Memorials are suggested to St. Jude Children’s Research Hospital or to the family for a memorial bench at Kearney Pediatric Dentistry. Ron was born September 22, 1948 in Rockland, Maine to Alvah and Clementine (Mazankowski) Fitzgerald. He graduated from Kearney Catholic High School in 1966. Ron joined the Navy and served from December 14th 1966 and was honorably discharged on September 3rd 1970. After his discharge he married Susan J. Luth on February 22, 1970. They lived in Kearney and together raised two children Lori and Eric. Susan passed away in November of 2010. Early in his carrier, Ron worked as an Outside Foreman for Agri-Automation & Country Structures in Kearney. He later worked for GTE and Frontier Communications as an Outside Maintenance Technician until retiring in 2009. Ron was recently employed at Sterling Apartments and Kearney Pediatric Dentistry as a Maintenance Specialist. He was a member of the American Legion, Kearney Kiwanis and St. James Catholic Church. Ron helped in numerous charitable organizations in the Kearney community. He was heavily involved in the Knights of Columbus where he held numerous positions with council #1728 including State Softball Chairman, State Youth Chairman, District Deputy, Deputy Grand Knight, Grand Knight and 4th Degree Knight of the Year. Later in life Ron met Mary Jo Freeze and the two were engaged in August of 2013. They enjoyed their time with each other and the many adventures they experienced together. Ron was a true gentleman that would always put other people’s needs before his own. He had a stoic, humble, kind and humorous nature that was contagious and resonated with everyone he met. When it came to helping, he was the first to show up and the last to leave. Ron never knew a stranger. He had a true passion for helping others and fixing things. He was a carpenter at heart and perfectionist when it came to his work. Ron enjoyed the outdoors and had many pastimes. He loved to travel and always looked forward to his annual trips to visit his sister Delores in Arizona and the occasional Fitzgerald reunion in Maine. When it came to Ron’s grandchildren that is where he felt most rewarded. His grandkids were drawn to his humble and gentle nature. He was most joyful when he was with his family especially his loving grandchildren. Ron was the most caring and supportive brother, husband, uncle, father and Papa. Ron is survived by his son, Eric and Lyndi Fitzgerald of Loup City, NE; daughter, Lori and Tom Pepperl of Kearney, NE; sister, Delores Mayfield of Phoenix, AZ; fiancée, Mary Jo Freeze of Kearney, NE; Cody and Meghan Freeze of Amherst, NE; Tara and Kasey Brandt of Kearney, NE; grandchildren, Olivia, Isaac, Elliott, and Amelia Fitzgerald, Daltyn Pepperl, Drew, Hunter, Cooper, and Sadie Freeze, Lane and Finley Brandt. Ron was preceded in death by his wife Susan Fitzgerald.

The family of Ron J. Fitzgerald created this Life Tributes page to make it easy to share your memories.

Send flowers to the Fitzgerald family.