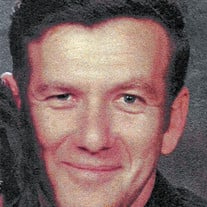 Ronald L. Serr, 72, of Junction City, KS died January 19, 2018 at Junction City, KS Graveside Memorial Services will be Friday, May 4, 2018 at 2:00 p.m.at Kearney Cemetery. Rev. Mark Oberbeck will officiate. Military rites will be provided by the Kearney American Legion Post #52, V.F.W. Post #759 and the Nebraska Army National Guard Military Honors Team. Memorials are suggested to the family to be designated at a later date. Please visit www.hlmkfuneral.com to leave a tribute or message of condolence. Horner Lieske McBride & Kuhl Funeral and Cremation Services in Kearney are in charge of arrangements. He was born March 20, 1945 in Long Pine, Nebraska to John and Helen Welfel Serr. He grew up in Kearney. He was a veteran of the Vietnam War, serving in the United States Army from September 17, 1967 to June 29, 1971 and continued to serve until 1980. He is survived by his daughter, Carla Hooper of Ravenna; grandchildren, Joshua, Travis, Mason, and Hannah Araujo; 2 great grandchildren; brother, Marvin Serr of Kearney; sisters, Shirley Burg and Mavis Meier both of Missouri He was preceded in death by his parents; sisters, Paulina Serr and Kay Novak and brothers, Melvin Serr, Donald Serr, Douglas Serr and Ray Meier; step father, Fritz Meier.

The family of Ronald L. Serr created this Life Tributes page to make it easy to share your memories.

Send flowers to the Serr family.