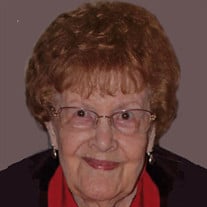 Rozella Mae Grassmeyer, age 99, of Kearney, passed away Saturday, September 21, 2019 at her home. Memorial services will be 2:00 PM, Saturday, September 28, 2019 at Horner Lieske McBride and Kuhl Funeral Home with Pastor Jerry Schwarz of First United Methodist Church officiating. Memorials are suggested to the family for future designation. Please visit www.hlmkfuneral.com to leave a tribute or message of condolence. Horner Lieske McBride & Kuhl Funeral and Cremation Services in Kearney is in charge of the arrangements. Rozella was born on August 22, 1920 in Riverdale to Charley and Hilder Pratt. She attended Riverdale schools, graduating in 1938. She then continued her education, graduating from the Grand Island Business School. She worked as a bookkeeper in Colorado, returning to work in Kearney at the phone company. She later worked at the Riverdale State Bank in Riverdale. On July 27, 1945, she married Ervin Grassmeyer in Smith Center, Kansas. They lived in Riverdale and Kearney raising their family which included son Doug and daughter Cheryl. Rozella was a dedicated wife, mother, grandmother, and great grandmother. She was kind, loving and enjoyed visits from her grandchildren and great grandchildren. She always had lots of treats for everyone and a great sense of humor. She was an avid music fan, loved to dance and was a loyal fan of Lawrence Welk. Surviving relatives include her son Doug and Janice Grassmeyer of Kearney; daughter Cheryl and Tom Weides of Kearney; grandchildren Erin Grassmeyer of Las Vegas, NV., Nathan and Ginger Weides of Kearney, Beth and Adam Greenquist of Seward, NE.; great grandchildren include Addison Kirschner of Las Vegas, Reid, Callie and Aubrey Weides of Kearney, and Brooks, Finnley, Camille and Baker Greenquist of Seward; and many nieces and nephews. Rozella was preceded in death by her husband, Ervin, parents Charley and Hilder Pratt and a brother, LaVerne Pratt.

The family of Rozella M. Grassmeyer created this Life Tributes page to make it easy to share your memories.

Send flowers to the Grassmeyer family.