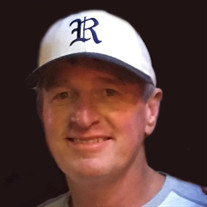 Russell James Hiemstra, 55, of Kearney, passed away Sunday, May 10, 2020 at the University of Nebraska Medical Center in Omaha. Private Services will be Friday, May 15, 2020 at 10:30 a.m. with Pastor Adrian Boykin officiating. The funeral procession will drive through the Patriot Park parking lot on the way to the Kearney Cemetery. That will be an opportunity for friends to show their support for the Hiemstra family. Please follow the current social distancing practices in place due to the COVID-19 restrictions. Memorials are suggested to the Kearney eFree Church, Kearney American Legion Baseball, or Kearney Catholic High School Girls Softball. Cards may be mailed to Horner Lieske McBride & Kuhl Funeral and Cremation Services, 2421 Ave. A, Kearney, NE 68847. Russ was born on July 22, 1964 in Pella, IA to Richard and Eileen (Dieleman) Hiemstra. Growing up, Russ helped his dad on the farm and had fun playing baseball with the neighbors. His love for sport was evident from an early age. Russ attended Pella Community High School where he played football, basketball and baseball. He graduated in 1982 and went to Southwestern Community College on a scholarship for baseball. After SCC, Russ was recruited by Guy Murray to play for Kearney State College where he earned his bachelor’s degree. After college, Russ applied his “never-known-a-stranger” personality to sales, most recently with Wells Blue Bunny. He continued to play semi-pro baseball throughout Nebraska as well as fastpitch softball and city-league basketball. During this time, he met the incomparable Shaun O’Rourke and swings flew. (Disclaimer: Shaun protested the inclusion of this sentence but was overruled by Russ’ family.) Russ quickly recognized she was the perfect mate to produce some strapping young lads. They married on February 6, 1993 and quickly produced the first lad, Mitchell James, on November 25, 1994. Jaret John rounded out the team on May 19, 1998. Russ continued playing sports and then gradually transitioned to coaching as his boys started to play baseball. He coached both boys’ teams to state championships. Along the way, he made close friendships with fellow teammates, players’ parents and coaches. Russ coached Shelton/Gibbon and Kearney Legion Baseball. In later seasons, he loved having the opportunity to have his son Jaret as one of the assistant coaches. In 2018, he was asked to be the first coach when Kearney Catholic started the Girls Softball team, taking them to the state tournament their second year. Russ enjoyed daily talks with Mitch complimenting the fine driving skills of other cars on the road, frequent trips to the Kearney Area Animal Shelter, neighborhood parties, fantasy leagues and much to the dismay of native Nebraskans, Iowa Hawkeye sports. Russ was preceded in death by his father-in-law Gerry O’Rourke. Russ is survived by his wife Shaun Hiemstra; sons Mitchell and Jaret Hiemstra all of Kearney; parents, Rich and Eileen Hiemstra of Pella, IA; sisters Rhonda and David Kermode of Pella, IA, Amy Hiemstra and Paul Damien of Austin, TX; mother-in-law, Mary O’Rourke of Kearney; sisters-in-law, Shannon and Trent Almassian of Grand Rapids, MI, and Shanne O’Rourke of Grand Island, NE. Russ treasured his faith, family and friends. He felt strongly about widening his circle of giving outside of sports to volunteering, serving lunches through the Kearney Jubilee Center and sponsoring children through eFree church’s Compassion program.

Russell James Hiemstra, 55, of Kearney, passed away Sunday, May 10, 2020 at the University of Nebraska Medical Center in Omaha. Private Services will be Friday, May 15, 2020 at 10:30 a.m. with Pastor Adrian Boykin officiating. The funeral procession... View Obituary & Service Information

The family of Russell James Hiemstra created this Life Tributes page to make it easy to share your memories.

Russell James Hiemstra, 55, of Kearney, passed away Sunday, May...

Send flowers to the Hiemstra family.