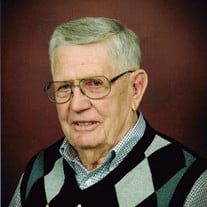 Russell Howe, 98 of Omaha, formerly Kearney, died on Thursday, December 23, 2021 at his home in Omaha. Funeral services will be on Thursday, December 30, 2021 at 1:30 p.m. at the First United Methodist Church in Kearney. Rev. Matt Fowler will officiate and burial will be at Prairie Center Cemetery at Havens Chapel. Visitation will be 1 hour prior to services at the church on Thursday. Memorials may be directed to the First Methodist Church in Kearney or the donor's choice. Please visit www.hlmkfuneral.com to leave a tribute or message of condolence. Horner Lieske McBride & Kuhl Funeral and Cremation Services in Kearney is in charge of arrangements. Russell Henry Howe was born April 3, 1923 in Weld County Colorado to Arlow and Stella Duncan Howe. His parents had homesteaded near New Raymer, Colorado in 1919 not far from the "Pawnee Buttes." His Father died in 1933 and his Mother and 4 sons returned to Buffalo County Nebraska and made their home with Grandparents Joseph and Jennie Duncan. He graduated from Pleasanton Nebraska High School in 1941. He was united in marriage to C. Corinne Baker on June 11, 1950 at the Methodist Church in Ericson, Nebraska. To this union three children were born: Jerry, Susan and Arlene. They farmed in Buffalo County until the late '70's when Russ opted to lease the farm ground and devote his time to a lifelong dream of restoring Model A Ford Cars. This hobby grew into a business and he remained active in this endeavor until his 85th birthday in 2008. He took great joy in participating in bringing the Classic Car Museum to Kearney. Russell was a member of the United Methodist Church in Kearney, where he served in numerous capacities. He was a charter member of the Ft. Kearney Antique Auto Club and later the Central Nebraska Car Club. Having always been busy "putting things together" he spent many "retirement" hours at the jig saw puzzle table. Left to cherish his memory are his wife of nearly 72 years, Corinne; son, Dr. Jerry Howe and his wife Terri; daughters, Susan Anderson and her husband Loren and Arlene Howe and Brad LaVallee; Grandchildren, Dr. Jarett Howe and his wife Vicki and Maggi Howe and Erik Marasco, and Kyle Anderson. Great grandchildren; Sawyer, Maison, Stella and Greta; Sister-in-law, Nevabelle Howe. He was preceded in death by his parents, brothers James/Jean, Andrew, Clarence and an infant sister.

The family of Russell Howe created this Life Tributes page to make it easy to share your memories.

Send flowers to the Howe family.