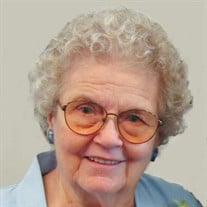 Ruth E. Nicholas Fowler, 98 of Kearney passed into the presence of her Lord on April 26, 2020 at Mount Carmel Keens Memorial in Kearney. Due to the current pandemic, a private family funeral service will be live streamed from the Kearney eFree Church on Friday, May 1, 2020 at 10:30 a.m., at www.kearneyefree.com/live. Pastor Brian Klein will officiate. There will be no visitation. There will be a private family burial at the Kearney Cemetery. In lieu of flowers, memorials are suggested to the Kearney eFree Church, 4010 7th Ave, Kearney, NE 68845 and please visit www.hlmkfuneral.com to leave a tribute, memory or condolence. Horner Lieske McBride & Kuhl Funeral and Cremation Services in Kearney is in charge of arrangements. Ruth was born on June 12, 1921 in Torrington, Wyoming, to Ruth E Martin Nicholas and John Thomas Nicholas. Her mother died at her birth and her father brought her to Kearney to be cared for in the home of her grandparents, Alice K and George E Martin, then President of Kearney State Teachers College. Ruth lived there for three years until her father, with his new wife, Kathryn Cloos Nicholas, was able to take her back to Wyoming. They soon moved back to farm near Mason City, NE. where Ruth spent most of her childhood. She attended Kearney State Teachers College, studying elementary education. Ruth was also an accomplished musician, playing in the College – Community Orchestra where she met her lifetime love, Gerald B. Fowler. On June 28, 1942 Ruth and Gerry were married at the First United Methodist Church in Kearney. Only about two weeks after their wedding, Gerry was called up to the Army to serve. While Gerry fought in the European front of WWII Ruth taught elementary school in Nebraska. After the war, Ruth and Gerald resided in Kearney where they raised their two sons, John and Robert. She eventually returned to college, completing her BA in Education to resume her teaching career for several years at Bryant and Central Elementary Schools. Eventually Ruth left teaching and became the administrative assistant at their church, Kearney Evangelical Free. Ruth loved reading, piano playing, and caring for others through church and community service organizations. Her life, always intertwined with Gerry’s, was characterized by deep faith, love and generosity. Despite losing her sight she never complained and remained positive and was a blessing and encouragement to everyone who knew her. She is survived by sons John (Barbara) Fowler of Kearney and Robert (Beryl) Fowler of Atlanta, GA; five grandchildren, Joshua (Charlene) Fowler, Katy (Nate) Wiens, Laura (Tony) Stuht, Megan (Justin) Merritt, and Ben (Caroline) Fowler, and nine great-grandchildren. Ruth was preceded in death by her husband of 77 years, Gerald in January of 2020; her parents; and three siblings, brother John (Jack) Nicholas, Jr., sister Margaret (Peg) Nicholas Bowen, and brother Benjamin Nicholas.

Ruth E. Nicholas Fowler, 98 of Kearney passed into the presence of her Lord on April 26, 2020 at Mount Carmel Keens Memorial in Kearney. Due to the current pandemic, a private family funeral service will be live streamed from the Kearney eFree... View Obituary & Service Information

The family of Ruth E. Fowler created this Life Tributes page to make it easy to share your memories.

Ruth E. Nicholas Fowler, 98 of Kearney passed into the presence...

Send flowers to the Fowler family.