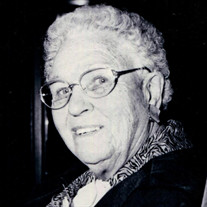 Sylvia 'Esther' Pemberton, 99, of Kearney, died Sunday, August 15, 2021, at Mother Hull Home in Kearney. Funeral services will be 10:30 a.m., Friday, August 20, 2021, at Faith United Methodist Church in Kearney with Pastor Jeff Wulf officiating. Masks will be required at the service. Burial will follow at the Kearney Cemetery. Memorials are suggested to the Trails and Rails Museum, Liberty Cemetery, or the East Lawn Kensington Scholarship. Horner Lieske McBride & Kuhl Funeral and Cremation Services of Kearney are in charge of arrangements. Esther was born near Heartwell, Nebraska on April 4th, 1922 to Homer and Mary Fankell. She was the youngest of five children. On September 27th, 1945 she and Virgil Pemberton eloped to Phillipsburg, KS. They were married for almost 60 years. Esther and Virgil lived east of Kearney where they farmed and raised three children. Esther doted on her grandchildren, including helping them at the farmers market where she shared sales and marketing skills as well as with their 4H projects. Later in life, after most people retire, she shared her passion for antiques working in several antique stores. She was an avid card player and member of the East Lawn Kensington Extension Club. Survivors include daughters Barbara Reige (Merle) of Kearney NE, Annette Newingham (Joe) of Greensboro NC, and Diane Beachly (Bill) of Assumption NE. Her grandchildren are Tracy Palmieri (Tony) of Gibbon NE, Cammy Hauswirth (Chad) of Sioux City NE, Cory Arrants (Kenya) of Ames IA, Amy Mason (Erik) of Greensboro NC, Landon Beachly (Amanda) of Fort Drum NY, Matthew Beachly (Jenn) of Eugene OR and Evan Beachly of Lincoln NE. She has five great and two step grandchildren. She was preceded in death by her parents, siblings and husband Virgil.

The family of S. Esther Pemberton created this Life Tributes page to make it easy to share your memories.

Send flowers to the Pemberton family.