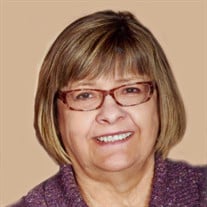 Sharilyn ‘Shari’ F. Hartman, age 75, of Kearney, passed away Tuesday, November 30, 2021 at CHI Health Good Samaritan Hospital in Kearney. Memorial services will be 10:30 a.m., Monday, April 4, 2022 at Holy Cross Lutheran Church with Pastor John Rasmussen officiating. Inurnment will follow at the Kearney Cemetery. Memorials are suggested to Holy Cross Lutheran Church or St. Jude Children’s Hospital. Please visit www.hlmkfuneral.com to leave a tribute or message of condolence. Horner Lieske McBride & Kuhl Funeral and Cremation Services of Kearney are in charge of arrangements. Sharilyn (Shari) Faye Hartman was born October 11, 1946 in Kearney to Martin and Faye (Larson) Kahle. She grew up on their farm south of Kearney and attended Kenwood Elementary and Kearney High School, graduating with the class of 1964. Shari was a member of Holy Cross Lutheran Church and became an organ and tissue donor with Live On Nebraska upon her death. After high school, while attending nurses training at the University of Nebraska, Lincoln, she met Jerry. She was united in marriage to Jerry L. Hartman on September 2, 1967 at Zion Lutheran Church in Kearney. In early years of their marriage, Shari moved with Jerry, following him in his work and living in Omaha, Lincoln, Fremont, and Kearney. In 1970, Shari gave birth to their daughter Rebecca (Becky) and in 1972 they made their home south of Kearney. In 1975, Shari and Jerry had their second daughter, Allison. Much to her daughters’ amazement and annoyance, Shari sewed all of their clothes. She was an excellent seamstress and an amazing homemaker. She often had a large garden and was always freezing and canning to be sure her family was fed. She is survived by daughter Becky (Aaron) Axtell of Minden and their children Ashleigh (Kyle Jauken) Axtell, Austin Axtell, Mitchell Axtell, and Matthew Axtell; daughter Allison (Patrick) Quiroz of Exeter, California and their children, Kassandra Quiroz, Theodore Quiroz, Luke Quiroz, and Owen Quiroz; sister, LaNita (David) Wilke of Kearney and brothers Alton (Cathy) Kahle also of Kearney and Ron (Judy) Kahle of Texas; brother-in-law Larry (Lorretta) Hartman of Hickman, Nebraska; along with nieces and nephews. Shari was preceded in death by her parents, husband Jerry, infant daughter Catherine, and niece Amanda Johnson.

The family of Sharilyn 'Shari' F. Hartman created this Life Tributes page to make it easy to share your memories.

Send flowers to the Hartman family.