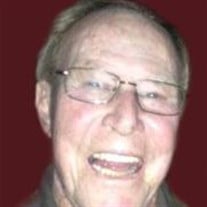 Stanley N. "Stan" Longfellow, 86, of Kearney, died Wednesday, June 5, 2019, at Mother Hull Home in Kearney. A celebration of his life will be at 11 a.m. Wednesday at Horner Lieske McBride & Kuhl Funeral Home and Cremation Services with Stan Dart officiating. Visitation will be 6:30-8:30 p.m. Tuesday at the funeral home. Memorials are suggested to the University of Nebraska at Kearney Foundation or Peru State College Foundation. He was born Feb. 5, 1933, in Green Forest, Ark., to Ernest and G.D. (Norris) Longfellow. He was the middle child of three siblings and said that explained a lot. The family moved to Peru, Neb., in about 1935 and made Peru their home. He graduated from Peru Prep High School in 1951 and from Peru State College with a BA in 1954. He served in the U.S. Army Medical Corps from 1954-1956 and was stationed at Seattle. He earned his master’s degree from Peru State College in 1961 and did graduate work at the University of Wisconsin under a National Science Foundation grant in 1961-62. He was awarded his Ph.d from Kansas State University in 1980. He taught biology and science for four years at Brock High School and taught biology for three years at Lyons High School and was the principal there. While at Lyons, he met the home economics teacher, Gay Nelson, and they were married on Aug. 28, 1965. They had three children, twins Jay and Kent (who died in childhood) and Vance. The family lived in Peru from 1965-66 while he taught at Peru State College. He then began a 33-year career of teaching biology at Kearney State College and the University of Nebraska at Kearney. He was published in the Platte Valley Review, was a member of the Ornithology Union and was a member of the Beta Beta Beta biology honorary. He enjoyed teaching and was always pleased when years later former students told him they enjoyed his classes. He taught gun safety classes for the Nebraska Game and Parks Commission and was proud to have passed that information on to young people. He loved the outdoors, hunting, fishing and morel mushroom hunting. Stan was fascinated with birds and his knowledge about them was endless. His other passion was golf, and he had three holes -in-one in his playing days. Stan loved all sports, especially watching his boys play. He was an excellent volleyball player and bowler. He followed the Huskers, the Kansas City Royals and all Loper sports. As a family, the Longfellows enjoyed attending the College World Series and watching Storm hockey. Family vacations usually included geography investigations, biology adventures and golf games. Stan is survived by his wife, Gay of Kearney; sons, Vance and his wife, Kim, of Kearney and Jay of Minden; and grandson Jaden of Kearney. He was preceded in death by his son, Kent; his parents; his brothers, Jack and David; and his nephew Michael Lane.

The family of Stanley N. "Stan" Longfellow created this Life Tributes page to make it easy to share your memories.

Send flowers to the Longfellow family.