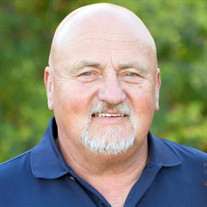 Steven “Steve” L. DeTurk, 66, of Amherst, died January 31, 2022 at Kearney Regional Medical Center. Funeral services will be held 10:30 am, February 3, 2022 at Trinity Lutheran Church in Amherst with Pastor Quintin Cundiff officiating. Burial will be at Immanuel Lutheran Cemetery near Amherst. Visitation will be from 5:00 to 7:00 pm, February 2, 2022 at Horner Lieske McBride & Kuhl Funeral and Cremation Services and one hour prior to the service at the church. Memorials are suggested to Trinity Lutheran Church in Amherst. Steven Lewis DeTurk was born on August 5, 1955, to Robert and Cherie’ (Rathjen) DeTurk in David City, Nebraska. He was baptized at Faith Evangelical Lutheran Church near Garrison, Nebraska, on September 4, 1955, and confirmed June 1, 1969, at Trinity Lutheran Church, Amherst, Nebraska, where he remained a member. Steve graduated from Amherst High School in 1973 and attended Central Community College. He married Deanne (Epley) DeTurk on May 27, 1978. Steve will be remembered as a hard worker, a loyal friend, and a devoted husband, father, and grandfather. Steve left this earth to rest in the arms of his Savior on Monday, January 31, 2022, at Kearney Regional Medical Center in Kearney, Nebraska. Left to pass on his legacy of faith and love of family is his wife, Deanne, along with their children: Stephanie (Clint) Stubbs of Riverdale, Tanis (Josh) Saldivar of Kearney, Brooke (Stephen) Janning of Amherst, Lacey (Daniel) Schroeder of Miller, and Jarod (Kaylinda) DeTurk of Overton. Grandchildren include Wyatt Anderson, Lilia Fulton, Colton and Bentley Stubbs; Camila and Kaison Saldivar; George Janning; Lincoln, Kage, and Raleigh Schroeder; and Lawson, Lennuxe, Lexlun, and Lacen DeTurk. Additional family include sisters, Marche’ (Doug) Epley of Pleasanton, and Michele DeTurk of Amherst; brother-in-law David (Kris) Epley of Wood River; and nine beloved nephews and nieces. Preceding Steve in death were his parents, Robert and Cherie’ DeTurk, and father- and mother-in-law, James and Loretta Epley, in addition to infant grandchildren. May Jesus’ words from Steve’s confirmation verse provide comfort and hope to those who mourn: Peace I leave with you; my peace I give to you. Not as the world gives do I give to you. Let not your hearts be troubled, neither let them be afraid. John 14:27

The family of Steven "Steve" L. DeTurk created this Life Tributes page to make it easy to share your memories.

Send flowers to the DeTurk family.