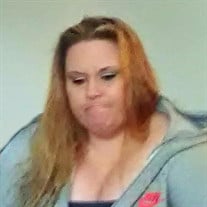 Tawnya Marie Liner, age 40, of Kearney, left this place to return home on January 3rd, 2022. A Celebration of Life will be held from 4:00 p.m. to 6:00 p.m., Saturday, January 22, 2022, at the Ramada, 301 2nd Avenue, Kearney. Memorials are suggested to the family to be designated later. Horner Lieske McBride & Kuhl Funeral and Cremation Services is assisting the family with arrangements. Tawnya was born on November 23rd, 1981, to Connie Richards and Dan Liner. She was vivacious and kept them on their toes. All that really knew her, loved her. She had a heart of gold. Tawnya fought a long and painful battle. She proved doctors wrong time and time again. For four long years she overcame obstacle after obstacle, but she was tired, her body was sore, and she was ready. She passed in peace with her mother, Connie, nearby. Rest in Paradise our beloved Tawnya. She is survived by four children, Kami, Jaiden, Bryson, and Araya; her grandmother Inez Richards of Purdum; mother Connie and stepdad Rod Roeder of Kearney; her father Dan Liner of Lincoln; stepmother Dee Liner of Kearney; sister Holly Liner of York; stepbrother Cyrus of Kearney. She also leaves behind aunts, uncles, nieces, nephews and numerous friends which she considered family. She was preceded in death by her brother Christopher Liner; grandfathers Kenneth Richards, Darryl Roeder, and Kenny Liner; grandmothers Joann Roeder and Florence Liner; and an aunt Bonita Richards.

The family of Tawnya M. Liner created this Life Tributes page to make it easy to share your memories.

Send flowers to the Liner family.