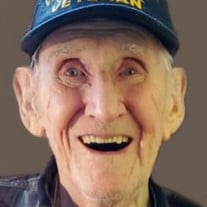 Thomas Owen Michels, age 95, of Kearney, passed away, Sunday, July 26, 2020 at his home. Graveside services will be 2:00 PM, Tuesday, July 28, 2020 at the Curtis Cemetery in Curtis, Nebraska. There will be no visitation. Memorials may be made to Ascera Care Hospice in Kearney. Please visit www.hlmkfuneral.com to leave a tribute or message of condolence. Horner Lieske McBride & Kuhl Funeral and Cremation Services of Kearney are in charge of arrangements. Tom was born December 29, 1924 in Chicago, Illinois to Thomas and Gertrude (Lennig) Michels. He was a focused and driven man, graduating from High School early and going on to graduating from Engineering School. He then entered the United States Army Air Corps, serving as a bomb site specialist during WWII. After the war, he then went on to Northwestern University in Evanston, Illinois on the G.I. Bill. Intrigued by the many attributes of the state of Nebraska, Tom moved to Lincoln to obtain yet another degree at UNL. He worked as an environmental engineer for the state of Nebraska, and also worked as a civil and electrical engineer in earlier years. On August 15, 1953 he married Mercedes Westfall in Curtis, Nebraska. Tom was gifted with a high aptitude in mathematics and engineering. He loved to learn and exercised his mind regularly. The organizations he served in were, The American Red Cross, The United Way, The American Public Works Association, and The National Society of Professional Engineers. He was also gifted with a great ear for music and was a talented clarinet player. After initially learning the clarinet, he went on to play several other instruments ending with his favorite, the piano. He played the piano by ear, writing down the chord he heard in his head, then letting his fingers fly. He loved playing music from his generation through his dad’s generation, playing at the local hospitals and nursing homes. The family feels very blessed to grow up in a home full of music, and Tom will be sorely missed. Survivors include his wife, Mercedes Michels of Kearney; two daughters, Helen (Paul) Lange and Kelly (William) Schellhase both of Kearney; son, Alan (Margaret) Michels of Payson, Arizona; eight grandchildren; seven great-grandchildren; and a brother, John Michels of West Union, West Virginia. Tom was preceded in death by his parents, and both sisters, Marjorie Urban and Dorothy Cheesman.

Thomas Owen Michels, age 95, of Kearney, passed away, Sunday, July 26, 2020 at his home. Graveside services will be 2:00 PM, Tuesday, July 28, 2020 at the Curtis Cemetery in Curtis, Nebraska. There will be no visitation. Memorials may be... View Obituary & Service Information

The family of Thomas O. Michels created this Life Tributes page to make it easy to share your memories.

Send flowers to the Michels family.