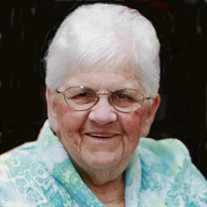 Verdella Kathryn Bunger, age 86, of Kearney, passed away Saturday, October 17, 2020, at the Good Samaritan Society in Ravenna. Funeral services will be 10:00 a.m., Friday, October 23, 2020 at the Kearney Seventh-Day Adventist Church with Pastor Rodney Bieber officiating. Burial will follow at 1:00 p.m. at Fort McPherson National Cemetery. Visitation will be from 5:00 p.m. to 7:00 p.m., Thursday, October 22, 2020 at Horner Lieske McBride and Kuhl Funeral Home. Memorials are suggested to the Kearney Seventh-Day Adventist Church or to Mother Hull Home. Verdella was born August 14, 1934 in Onaka, South Dakota to Jake and Katie (Bieber) Stotz. She joined her 6 year old brother Clifford and four years later her sister Shirley was born. Verdella graduated from Plainview Academy in Red Field, South Dakota in 1951. After graduating, she obtained her teaching certificate and taught in a one-room school house for a couple of years. Verdella married Arlen Helm on January 31, 1954 in Chicago, Illinois. They had two sons, Jerry and Dean. When the family moved to Kearney in 1966, she started working at the Boys Training School where she worked for several years. They divorced a year later. Verdella married LeRoy Bunger on December 8, 1968 in Upland, Nebraska. LeRoy had two children Craig age 5 and Deb age 2. To LeRoy and Verdella, Angela was born in 1972. Besides being a homemaker, she sold Avon for many years and has many collectibles to prove it. Verdella was the Treasurer for WCTU for many years and attended many of their conventions across the country. She was on the Board of Directors for Mother Hull Home. Verdella was a dedicated member of the Seventh-day Adventist Church and held various positions in the church over the years. She loved everyone, especially children. And if you know Verdella, you know she was blessed with the gift of gab. Verdella is survived by her sons, Jerry and Barb Helm of Olathe, KS, Dean and Sue Helm of Loveland, CO; daughter, Angela and Roger Bontz of Kearney, NE; step-son, Craig Bunger and girlfriend Deb Paben of Kearney, NE; step-daughter, Deb and Ron Greuter of Upland, NE; brother Clifford and Roberta Stotz of Inver Grove Heights, MN; sister Shirley Duley of Anson, ME; 11 grandchildren, 20 great grandchildren; nephew, Craig Duley; nieces, Sondra Bartels and Shari Goulette; as well as many relatives and friends. Verdella was preceded in death by her parents, husband, and brother-in-law, Keith Duley.

The family of Verdella K. Bunger created this Life Tributes page to make it easy to share your memories.

Send flowers to the Bunger family.