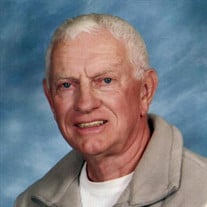 Vernon L. Plambeck, age 86 of Omaha, formerly Kearney, died on Saturday, February 26, 2022 at Brookstone Village in Omaha. Memorial services will be on Saturday, June 11, 2022 at 9:30 a.m. at First Presbyterian Church in Kearney. Pastor Clint Cozier will officiate and burial will be at Kearney Cemetery. There will be no visitation. Please visit www.hlmkfuneral.com to leave a tribute or message of condolence. Horner Lieske McBride & Kuhl Funeral and Cremation Services of Kearney is charge of arrangements. One of Nebraska’s greatest sportsmen has left the competition. Vern Plambeck’s first sign of his gentlemanly demeanor, was allowing his sister Verlene to arrive first at their twin birth on September 23, 1935. His true competition really started when his father died three years later from strep throat, leaving his mother with 4 children under the age of 5. The little family lived in Kenesaw, Nebraska until 1948 when they moved to Hastings, Nebraska. Vern’s introduction to team sports began at Hastings High School, where he participated in football, basketball, track and American Legion Baseball. He moved on the Hastings College where he graduated in 1957 with a bachelor’s degree in English and secondary education. He went on to earn his Masters degree from UNL in 1964, and his Ph.D in 1973. While at HC he was a four-year letterman in baseball, played basketball, and football where he was first-string quarterback, with his back up the well-known T.O of Husker football fame. (At least that’s what we all believed). During college in 1954 he began an avocation in high school sports officiating, continuing as a basketball referee until 1989 and as a football referee until 2006. He was happy to stay in football officiating until the age of seventy-one, working his last game at O’Neill, Nebraska and ending a 52-year career. His other reffing highlights include working the first overtime football game in Nebraska high school football, receiving the Nebraska Highschool Sports Hall of Fame distinguished Service Award in 2005, and induction into their Hall of Fame in 2006. It was also at Hastings College where he met his wife of 45 years, Marlene Nicholas. After their wedding on May 25th 1958 in Valentine, NE, they lived in Fairbury Nebraska where they both taught English at Fairbury High School. While in Fairbury, his son Thane Earl was born in 1961, and daughter Alison Mary on Valentine’s Day in 1963. The family moved to Kearney in 1964 where he taught in the English Department at Kearney State College (now University of Nebraska at Kearney) until his retirement in 2000. While in Kearney, Vern had many roles with in the college and community. He was editor of The Platte Valley review from 1976 to 2000 and president of the KSC Faculty Senate during the 1985-86 term. He was a member of the Board of Directors of the Kearney Symphony Orchestra, and for two years the president of the organization. He was a member of the Kearney public schools’ arboretum committee and for many years was titular chair of that committee. He acted as an enunciator for several years in the Kearney Literacy Council’s Corporate Spelling Bee. He served for numerous years as a scorer at NSAA golf tournaments at Meadowlark Hills Golf Club. He was president of Kearney Tennis Association of a number of years in the 70’s and 80’s, and was pleased to have taken roles in two plays produced by the Kearney Community Theater. He was preceded in death by his wife Marlene in 2003, his father Earl Plambeck in 1938, and mother Hulda Shukei Plambeck in 1992. Special friend Sylvia Gustin in 2021. Survivors include his children and their families; Dr Thane Plambeck and his wife Gloria Gatlin of Palo Alto California, and their sons Cole and Owen Plambeck; Alison Plambeck Braun and her husband Michael of Omaha, and their son Nicholas Gilbert and his wife Lindsey Lemaster Braun and sons Mason and Benjamin; and their son Scott Michael and his wife Kayla Johnson Braun and their children Lucas, Emma and Ava. Also survived by brother Loren Plambeck; sisters Verlene McFerren and Margaret Lovgren and their families. Memorials are directed to the First Presbyterian Church in Kearney, Nebraska. For when the one great scorer comes to mark by your name, it matters not whether you won or lost, but how you played the game. – Grantland Rice. Final score: Parkinson’s Disease 1, Whitey 0

The family of Vernon "Vern" L. Plambeck created this Life Tributes page to make it easy to share your memories.

Send flowers to the Plambeck family.