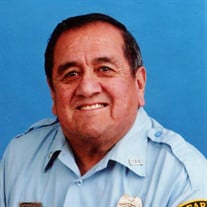 Victor Luis Cervantes, age 81, of Kearney, died peacefully in his home on June 5th, 2020. Celebration of Life Services will be 9:30 a.m., Saturday, September 19, 2020 at Prince of Peace Catholic Church with Reverend Paul Colling officiating. Interment will follow at the Kearney Cemetery. There will be no visitation. Memorials are suggested to the Kearney Volunteer Fire Department. Please visit www.hlmkfuneral.com to leave a message of condolence or tribute. Horner Lieske McBride and Kuhl Funeral and Cremation Services in Kearney are in charge of arrangements. Victor was born on August 11, 1938 in Kennedy, Texas to Felix and Juanita Cervantes. He grew up in Corpus Christi, Texas. He quit school in the 8th grade to help support the family. At age 17, he left home with friends on their motorcycles. They visited all of the lower 48 states, working various jobs on the way. His motorcycle journey ended in Wisconsin. In Wisconsin he met and married Marion Dunn in 1959. The family moved to Kearney, a few years later, to help support his family which had settled in Kearney and his parents were unable to speak English. Victor worked 22 years at Rockwell International until they closed their doors. He later worked at UNK for 10 years as a custodian until his retirement in 2000. Victor always had a smile for everyone around him. He enjoyed softball and bowling, was an avid Lopers fan, and served as a trustee for the Fraternal Order of Eagles. Vic was a member of the Kearney Volunteer Fire Department from March 1979 to October 1988. Survivors include his long time companion, Vicki Wiseman of Kearney; two daughters, Nancy Beebee of Kearney and Dolly Cervantes of Tacoma, Washington; two sons, Charlie Cervantes of Lordia, Florida and Michael Cervantes of Lincoln, Nebraska; two sisters, Theresa Eaton of Corpus Christi, Texas and Mary Hernandez of Kearney; a brother, Eddie Cervantes of Kearney; 12 grandchildren; 2 great grandchildren; numerous nieces; nephews, and other family members. He was preceded in death by his parents; a son, Victor Cervantes, Junior; and two brothers, Felix Cervantes, Junior and Joe Cervantes.

The family of Victor L. Cervantes created this Life Tributes page to make it easy to share your memories.

Send flowers to the Cervantes family.