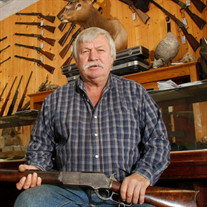 Wilfred “Willie” P. Kramer, age 73, of Kearney, passed away on Sunday, May 23, 2021 at his home near Kearney. A Gathering of Remembrance will be held on June 5, 2021 from 1:00 p.m. – 4:00 p.m. at Willie’s residence, 2610 East 11th Street in Kearney, casual attire is requested. There will be no visitation. Memorials are suggested to the Shriners Hospital, care of the family. Please visit www.hlmkfuneral.com to leave a tribute or message of condolence. Horner Lieske McBride and Kuhl Funeral and Cremation Services in Kearney are in charge of arrangements. Willie was born on November 23, 1947 in North Platte, NE to Leonard and Helen Joy (Everett) Kramer. He attended school in Stapleton, NE. Willie married Virginia Haddock on December 4, 1965 in North Platte, NE. Willie owned and operated Old West Guns on Central Avenue in Kearney for over 35 years, retiring in 2020. Willie had several hobbies over the years that were important to him including hunting, fishing, motorcycle racing, stockcar racing, scuba diving, classic cars and attending the Sugar Valley Rally. He was always willing to share a good story and perhaps embellish it just a bit. Willie was an encyclopedia when it came to firearms, especially Winchesters; which he greatly enjoyed collecting. Surviving relatives include his wife, Virginia of Kearney; sons, Teddy and Jodene Kramer of Ogallala, NE and Larry and Tereasa Kramer of Kearney, NE; 5 grandchildren; 6 great grandchildren; siblings and spouses, Shorty and Cathy Kramer of Stapleton, NE, William Kramer of Dallas, TX, Linda Crisman of Gothenburg, NE, Marlene Johnson of Farnam, NE, Lynette and Steve Krab of Paxton, NE, Florence Sims of Mesquite, TX, Gloria and Steve Shingleton of Albuquerque, NM and Tina and Rich Terry of North Platte, NE; several other extended family and friends. Willie was preceded in death by his parents; son, Mike Kramer; siblings, Larry, Wally and Viola. Photo Credit-Kearney Hub

The family of Wilfred "Willie" P. Kramer created this Life Tributes page to make it easy to share your memories.

Send flowers to the Kramer family.