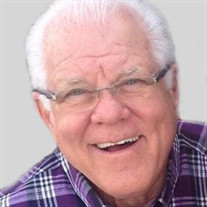 William “Bill” M. Nelson, 72, of Kearney, NE died Friday, August 16, 2019 at the University of Nebraska Medical Center in Omaha. A Memorial service will be Tuesday, August 20, 2019 at 3:00 p.m. at New Life Church in Kearney. Visitation with family will be one hour prior to services at the church. Pastor Mark Kremer will officiate and burial will be at a later date at Kearney Cemetery. There will be a reception at the church immediately following the service. In lieu of flowers, Memorials will be used to create a UNK Football Unity Council Scholarship. Please visit www.hlmkfuneral.com to leave a tribute or message of condolence. Horner Lieske McBride and Kuhl Funeral and Cremation Services are in charge of arrangements. Bill was born on January 25th, 1947 to William M. and Audrey M. (Hueftle) Nelson in Hastings, NE. He attended Kearney High School and graduated with the class of 1965. Bill later attended Kearney State College and earned a Bachelors Degree in Education and later a Masters Degree in Kinesiology. He married Coni K. von Hoff on May 12, 1988. Bill was an educator, coach and also in sports medicine for NASCAR. Faith was a very important part of Bill’s life as he led numerous bible studies as a member of the Berean Church of Lincoln. Bill and Coni would later attend New Life Church in Kearney. Bill was a man of laughter. He was the best story teller there was. He could do any personation you asked of him. Bill also loved music and had such an ear for it. He played the trumpet & organ in a rock band called The Elastic Band for one year back in his college days. He loved to sing at church when the choir sang and helped with worship every now and then. Bill had a passion and a talent for starting programs within a number of organizations including the Work Hardening Program at Kearney Orthopedic and Fracture Clinic, a fitness and rehab center for Motor Racing Outreach, and most recently, the Unity Council with the UNK Football Team. It was a dream come true for him to incorporate his love for mentorship, football and leadership. Most precious to Bill was being an “Uber Grampz” for his grandchildren. Nothing blessed him more than spending time watching them fulfill their passions whether on a court, a field, a stage, a rink, a lake or a golf course. Bill cherished his wife Coni above all things. He loved to cater to her by helping with housework, taking her for ice cream at Mc Donalds, waiting patiently for her to browse for hours while shopping, and taking her to and picking her up from work. She was the love of his life and his love for her was evident in all he did. Surviving relatives include his wife, Coni of Kearney; children, Kyle and Julie Nelson of LaVista, NE, Jason and Lisa von Hoff of Lincoln, NE, Krisa and Jeff Smith of Bennington, NE, Nici and Todd Ahrenholz of Willmar, MN and Kylie and Glen Wolford of Kearney; sister, Cynthe and Keith Staehr of Kimball, NE; brothers, Scott and Teri Nelson of Lincoln, NE and Randy and Jeanne Nelson of Seward, NE; grandchildren, Ryan, Alexandria, Ashley and Kirsten Nelson, Tristin and Emmi von Hoff, Reagan and Reese Smith, Tedd and Henry Ahrenholz, Charlie and Hattie Wolford; numerous other nieces and nephews and other extended family and friends. Bill was preceded in death by parents.

The family of William "Bill" M. Nelson created this Life Tributes page to make it easy to share your memories.