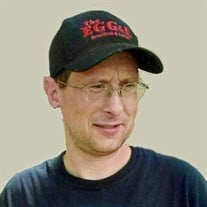 Willie Scott Richards, age 45, of Kearney, passed away Friday, June 5, 2020 at his home. Graveside services will be 10:30 a.m., Friday, June 19, 2020 at the Elm Creek Cemetery with Pastor Greg Mast officiating. Memorials may be made to the Kearney Animal Shelter or Crossroads Center Rescue. Willie was born September 22, 1974 in Cozad, NE., to William and Leatha (Upton) Richards. In 1980 Willie moved to Elm Creek with his mom and younger brother, Todd. He went to kindergarten in Elm Creek. They later moved to Kearney. Growing up, Willie was always adventurous. He enjoyed riding bikes, playing at parks, swimming and camping with his grandma and grandpa Upton. Willie had a tender heart and loved animals. He found his dog ‘Dagger’ in the road ditch while walking home. He brought the puppy home and he became a member of the family for several years. He always had animal friends. Willie went on vacations with his brother Todd and him mom. He went swimming and seashell hunting in the Gulf of Mexico, and also went to the Badlands, Yellowstone, and Glacier Park with lots of camping, swimming and exploring. His saying was “the joy is in the journey”. Willie received his GED and later attended Casper Community College studying large equipment operations. He worked at Wyoming Steel and Recycling. After returning to Nebraska he moved to Norfolk and attended Northeast Community College studying automotive technology. He met and had many special and close friends. Wherever he was, he always explored the museums and parks in the area. He returned to Kearney and worked at several different eating establishments. He enjoyed gong on picnics, rock collecting, fishing, hiking, movies, playing video games, and of course, cars. Willie leaves behind to mourn his passing, his mother Leatha (Kevin) Schott of Kearney; brother Todd (Desiree) Richards of Kearney; his aunt Phyllis Sadler of Kearney; uncle Gene (Shirley) Petersen of New York; cousin, Jeannie Lakey of North Platte, two nieces; and many, many friends. He was preceded in death by his father William; grandma and grandpa Richards; grandma and grandpa Upton; uncles; aunts; and several cousins on both maternal and paternal sides of the family.

Willie Scott Richards, age 45, of Kearney, passed away Friday, June 5, 2020 at his home. Graveside services will be 10:30 a.m., Friday, June 19, 2020 at the Elm Creek Cemetery with Pastor Greg Mast officiating. Memorials may be made to the... View Obituary & Service Information

The family of Willie S. Richards created this Life Tributes page to make it easy to share your memories.

Send flowers to the Richards family.