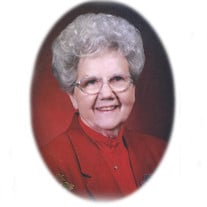 Wilma Jean Webb, age 94 of Kearney, passed away Tuesday, June 8, 2021, at Brookestone Gardens in Kearney, NE. Memorial services will be on Monday, June 14, 2021 at 2:30 p.m. at the First United Methodist Church in Kearney. The service will be livestreamed and can be viewed by visiting www.kearneyfirstumc.org. Pastor Alan Davis will officiate. The burial will take place prior to services on Monday at 1:30 p.m. at the Kearney Cemetery. There will be no visitation. Memorials in lieu of flowers are suggested to the Todd Becker Foundation, https://toddbecker.org/donate/. Please visit www.hlmkfuneral.com to leave a tribute or message of condolence. Horner Lieske McBride & Kuhl Funeral and Cremation Services is in charge of arrangements. Wilma was born on July 19, 1926 in Eddyville, NE to Clyde and Mildred (Nalls) Tabor. She graduated from Broken Bow High School in 1944. She played first base on the softball team in Broken Bow while attending high school. She moved to Lincoln, NE after graduating and worked for Lincoln Telephone Company. Wilma met Merle McClemens in Lincoln at a USO Dance while he was stationed there for the Army Air Corp. They were married in June of 1946. They were parents to Merle Robert McClemens II who was born in 1948 and Richard Ray McClemens born in 1952. Merle died in 1980 and Wilma became a widow at the age of 53 after 33 years of marriage. She was an active member of the Together Sunday School class and the class was responsible for Wilma meeting Wayne Webb, who was a member of the class. They were married in June of 1982 and spent 29 years together until Wayne’s death in 2012. Wilma worked for many years as a bank teller, beginning at First National Bank and later at Platte Valley State Bank in Kearney. She was an active member of First United Methodist Church and taught a variety of Sunday School classes over the years. She loved working outside and always had beautiful flowers blooming in her yard. She enjoyed being a member of a local garden club and loved filling her bird feeders each day. She was excited to travel to many places and went on bus tours throughout the United States. She was an avid Husker football fan. Surviving relatives include her sons, Bob (Judy) McClemens of Jacksonville, FL and Dick (Jeanne) McClemens of Kearney; sister-in-law Glenys Tabor of Lincoln, NE; sister Patricia Borchardt of Brighton, CO; brother, Dean Tabor of Loveland, CO; grandchildren, Missy (Jay) Baker and Chad McClemens, all of Jacksonville, FL; Chris (Katie) McClemens of Kearney, NE; and Andy McClemens of Norfolk, NE; 5 great grandchildren: Bryce Baker of Jacksonville, FL; Paul, Toby, Joanna, and Molly McClemens of Kearney and other extended family and friends. Wilma was preceded in death by her 1st husband, Merle McClemens; 2nd husband, Wayne Webb; sister Marva Newquist; brothers Don Tabor and Harlan Tabor.

Wilma Jean Webb, age 94 of Kearney, passed away Tuesday, June 8, 2021, at Brookestone Gardens in Kearney, NE. Memorial services will be on Monday, June 14, 2021 at 2:30 p.m. at the First United Methodist Church in Kearney. The service will... View Obituary & Service Information

The family of Wilma J. Webb created this Life Tributes page to make it easy to share your memories.

Send flowers to the Webb family.