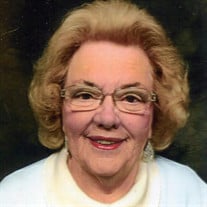 Winona J. ‘Jody’ Londer, age 74, of Kearney, passed away Friday, January 29, 2021 at CHI Health St. Elizabeth in Lincoln. Funeral Services will be on Thursday, February 4, 2021 at 10:30 a.m. at Faith United Methodist Church in Kearney. Pastor Jeff Wulf will officiate and burial will be at the Kearney Cemetery. Visitation will be on Wednesday, February 3, 2021 from 5:00 p.m. – 7:00 p.m. at Horner Lieske McBride & Kuhl Funeral Home and also 1 hour prior to services at the church on Thursday. Memorials are suggested to the Kearney Public Schools Foundation. The service can be viewed by visiting the Faith United Methodist Church Facebook page. Please visit www.hlmkfuneral.com to leave a tribute or message of condolence. Horner Lieske McBride & Kuhl Funeral and Cremation Services in Kearney are in charge of arrangements. Jody was born on September 10, 1946 in Kearney to Grant and Dorothy (Chamberlain) Bickford. She attended Kearney High School and graduated with the class of 1964. Jody married Paul Londer on March 14, 1965 in Kearney. Jody and Paul were blessed with two children, Vicki and Bret. Jody, along with Paul owned/operated an auction company, Londer’s Auction and real estate company, Londer’s Real Estate. Jody was a member of Faith United Methodist Church in Kearney. Jody is survived by her husband, Paul of Kearney; daughter, Vicki Londer of Omaha, NE; son, Bret Londer and his wife Mandy of Carlsbad, CA; and 2 beautiful grandchildren Teddy and Emmy. She is also survived by 4 nieces, a nephew, a grandnephew, 2 great-grandnieces, and a great-grandnephew. Jody was preceded in death by her cherished parents, Grant and Dorothy Bickford and her beloved brother Ronald Bickford of Grand Island, NE

The family of Winona "Jody" J. Londer created this Life Tributes page to make it easy to share your memories.

Send flowers to the Londer family.