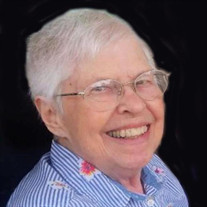 Y’londa R. Anderson, age 90, of Kearney, passed away Friday, April 22, 2022 at Mount Carmel Home Keens Memorial. Graveside services will be 11:00 a.m., Friday, May 6th, 2022 at the Kearney Cemetery with Pastor Steve Shanno officiating. Memorials are suggested to the American Red Cross or the Buffalo County Goodfellows. Horner Lieske McBride & Kuhl Funeral and Cremation Services in Kearney is in charge of arrangements. Y’londa was born Sept. 10, 1931, in St. Michael, NE to Velma (Vlach) and Mark Kenney. She attended school in Kearney, graduating in 1949, then went on to attend Kearney State Teachers College. Y’londa married James W. Anderson on April 5, 1952. After living in several states during Jim’s commission with the Navy, they settled in Kearney. Y’londa and Jim had 4 children. Y’londa was kind and loving. She enjoyed helping people and volunteered for the American Red Cross, Buffalo County Goodfellows, and Good Samaritan Hospital. She was a member of the First United Methodist Church and several service organizations. She was happiest spending time with family and friends. Survivors include her children: Scott Anderson and wife Gloria of Kearney, Robert Anderson of Kearney, Susan Ritchie and husband Terry of Ansley, and Joe Anderson and wife Jill of Lincoln, as well as 12 grandchildren, 15 great-grandchildren, and 1 great-great-grandchild. Y’londa was preceded in death by her husband Jim in 2019, and her mother Velma and stepfather Robert Hazlett.

The family of Y'londa R. Anderson created this Life Tributes page to make it easy to share your memories.