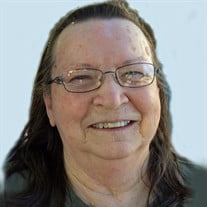 A. Jeanette Lacey, 76, of Kearney died Wednesday August 1, 2018, at Mt. Carmel Home and Rehabilitation Center in Kearney. Memorial services will be at 2:00 p.m. Monday, August 6, 2018, at Horner Lieske McBride & Kuhl Funeral and Cremation Services in Kearney. Rev. Dean Pofahl will officiate. Burial of ashes will precede services at 10:00 a.m. at Lone Tree Cemetery at Weissert, Nebraska. There will be no visitation. Memorials are suggested to the American Cancer Society or Shelton High School FFA Greenhouse Project. Online condolences may be submitted by visiting www.hlmkfuneral.com. Horner Lieske McBride & Kuhl Funeral and Cremation Services in Kearney are in charge of arrangements. Jeanette was born March 5, 1942, to Pete and Wilma (Barnes) Peterson at their rural Custer County home near Weissert, Nebraska. She grew up in the area and attended school in Broken Bow, NE. She married Thomas Sickler in 1959 and to this union two sons were born; Tony and Terry. The couple moved to California for a couple of years, then back to the area and lived in Kearney, Pleasanton and Shelton. She and her husband owned and operated Tom’s Texaco in Shelton. They later divorced and she then married John Lacey in 1982. She worked as a bookkeeper at her husband’s business; Big L Construction. She retired and moved to Kearney where she has lived the past 13 years. Surviving relatives include her son Terry Sickler and wife Judi of Kearney; grandson, Vince Sickler and wife Mallory of Elkhorn, NE; granddaughters, Stormy Taylor and husband Charlie of Grand Island, NE, Claire and Hannah Sickler both of Lincoln, NE; brother, Mel Peterson and wife Donna of Westerville, NE; sister-in-law, Doris Peterson of Kearney and special friend Barb Rodriguez of Shelton. She was preceded in death by her parents; husband John Lacey; son, Tony Sickler and brother, Norman Peterson.

The family of A. Jeanette Lacey created this Life Tributes page to make it easy to share your memories.

Send flowers to the Lacey family.