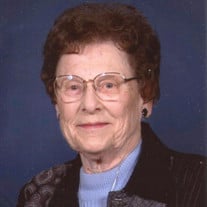 Adella Elizabeth Miigerl, 97, of Kearney passed away Saturday, November 14, 2020 on her birthday at Brookestone Gardens Assisted Living Facility in Kearney. A Mass of Christian Burial will be on Thursday, November 19, 2020 at 10:30 a.m. at St. James Catholic Church in Kearney with Father Joe Hannappel officiating. Burial will be at St Joseph Cemetery south of Ravenna. Visitation with family will be Wednesday, November 18, 2020 from 4:00 p.m. - 6:00 p.m. with Rosary following at 6:00 p.m. all at St James Catholic Church. Memorials are suggested to the family, to be designated later. Please visit www.hlmkfuneral.com to leave a tribute or message of condolence. Horner Lieske McBride & Kuhl Funeral and Cremation Services in Kearney are in charge of arrangements. Adella Elizabeth (Vacek) Miigerl, the daughter of Charles William and Cecilia Mary (Dusek) Vacek, was born November 14, 1923 at the Homestead of her grandfather John and grandmother Anna (Posusta) Vacek 7 miles southeast of Ravenna, NE in Schneider Township. On March 1, 1929 she, her parents and sister Irene moved to a farm 5 miles southeast of Ravenna in Garfield Township where she grew up. Her first School was Union District #62. She would later attend Ravenna High School where she graduated in 1942. After graduation she attended Kearney State College and then taught Rural Schools District #103 and #65 for five years in the Antelope Valley region. She enjoyed playing piano, embroidery, working with genealogy, was in 4H many years and also was active in the Altar Society, music ministry and taught Catechism at St Wenceslaus and St Mary's Prairie Center parishes. At present she was a member of St James Catholic Church in Kearney. She received all her Sacraments and was devoted to the Miraculous Medal. She loved teaching her children and grandchildren music. She laughed a lot and was a happy person. Adella Elizabeth Vacek married Paul Eugene Miigerl on August 17, 1949 at St Wenceslaus Catholic Church south of Ravenna, Nebraska. They lived on a farm in Valley Township around 11 miles southwest of Ravenna. To this union four daughters were born. Patricia Marie, Linda Louise, Roberta Ann and Paula Rene. Paul and Adella retired in January 1989 and on December 29, 2012 moved to Regency Retirement Residence in Kearney, Ne. Survivors include her daughters, Patricia Kieborz and her husband Rodney of Litchfield, Roberta Paitz and her husband Patrick of Gibbon, Paula Albright and her husband David of Kearney; Nine Grandchildren, Jason Pokorney and his wife Marci of Meridian ID, Shane and Lance Kieborz of Kearney, Michael Paitz and his wife Jenny of Henderson, Angela Baker and her husband Corey of Omaha, Heather Rosenthal and her husband Joe of Omaha, DaLyn Anderson and her husband Destry of Couer D'Alene, ID, Logan Albright and his wife Annie of Kearney and Lauren Stadler and her husband Riley of Minden; Eight Great grandchildren, Delaney Pokorney, Kayley Paitz, Mason and Kayden Albright, Levi and Autumn Baker and Brixten and Sutton Stadler. She was preceded in death by her parents; husband, Paul E. Miigerl; sister, Irene Shrader in 1960; daughter, Linda Pokorney in 1998; twin Granddaughter, Diedra Pokorney in 2015 and son-in-law Daniel Pokorney in 2019.

Adella Elizabeth Miigerl, 97, of Kearney passed away Saturday, November 14, 2020 on her birthday at Brookestone Gardens Assisted Living Facility in Kearney. A Mass of Christian Burial will be on Thursday, November 19, 2020 at 10:30 a.m. at... View Obituary & Service Information

The family of Adella E. Miigerl created this Life Tributes page to make it easy to share your memories.

Send flowers to the Miigerl family.