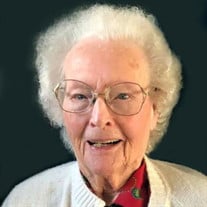 Agnes King Liggett, age 104, passed away in Tomball, Texas on January 19, 2022. Agnes had been under the loving care of her Son, Larry and his wife, Judy King. Memorial services and inurnment at Ft. McPherson National Cemetery are tentatively scheduled for later this spring. Please visit www.hlmkfuneral.com to leave a tribute or message of condolence. Memorials are kindly suggested to the Shelton United Methodist Church, 207 A St., Shelton, NE 68876. Horner Lieske McBride & Kuhl Funeral and Cremation Services in Kearney are in charge of arrangements. Agnes lived her life positively, focusing on family and friends, uplifting those around her. Her indomitable spirit could be felt by all who had the pleasure of knowing her. Her faith sustained her and gave her strength. Agnes was born to Fredrick and Emma Wieland Seifer in Grant, NE on June 2, 1917. The family soon moved to the ranch 21 miles north of Sutherland just above the Birdwood Creek. Agnes attended District 6 country school in McPherson County. She graduated from Sutherland High School in 1936. She was able to attend High School by living and working for the Shoup family northwest of Sutherland. Agnes was united in marriage with Edgar “Bob” King, June 25, 1936, in the Shoup home. Agnes and Bob lived in Sutherland, North Platte, Eustis, and in Farnam where they raised their son’s Larry and Terry. The family operated King Lumber and Hardware. After selling the business they moved to the Kearney area, Agnes continued her love for retail and interaction with customers at Kaufmann and Wernert Department Store. Bob and Agnes were always ready for a card game and were active in many local Gibbon activities. Bob past away in January 11, 1994, a few days short of his 85th birthday. Agnes’s zest for life was demonstrated when at the age of 79, she and Harold Liggett were married on August 3, 1996. Harold and Agnes enjoyed nearly 17 years together, the last few years at Northridge Retirement Community in Kearney. Harold passed away at 95 on May 23, 2013. Agnes was a member of the Shelton Methodist Church, American Legion Auxiliary, and Faithful Rebekah Lodge 89. She was a founding member of Gibbon’s Smile City Kitchen Band Agnes is survived by; her sons Larry King and wife Judy, Tomball, TX, Terry King of Omaha and partner ReeAnn Regier of Aurora; grandchildren and their spouses, Bret and SueZan King, Gail and Tori Tomasino all of Greeley, CO, Bart and Serena King, Tomball, TX, James King, Lincoln, NE, Libby and Jaime King, Brooklyn, NY, David and Tifany King, Boise, ID, Mistia and Harmon Zuckerman, Boulder, CO, Jeneia Mullins, New York, NY; stepdaughters and spouses: Janice and Lynn Bombeck of Shelton, and Patricia and Donald Stienike of Fremont; step Grandchildren; Great Grandchildren and Great-Great Grandchildren. Survivors also include her sister, Alice Morgan and sister-in-law Irene Siefer of Sutherland; many special nieces, nephews, and other family members. In addition to her first and second husbands, Bob and Harold, she was preceded in death by her parents; Sisters, Esther and husband Albert Bosch, Helene and husband Harry Hoskenson, Martha and husband Eugene King: Brothers Fred and wife Iona Seifer and Paul Seifer; Sister-in-laws; LaVon and husband Edward Crosby, Ruth and husband John Crocket; Brother-in-laws, Charles Morgan, Byron and wife Bernice King, J. Ray King and wife Margret. Daughter-in-law LaDonna King.

Agnes King Liggett, age 104, passed away in Tomball, Texas on January 19, 2022. Agnes had been under the loving care of her Son, Larry and his wife, Judy King. Memorial services and inurnment at Ft. McPherson National Cemetery are tentatively... View Obituary & Service Information

The family of Agnes L. King Liggett created this Life Tributes page to make it easy to share your memories.

Agnes King Liggett, age 104, passed away in Tomball, Texas on...