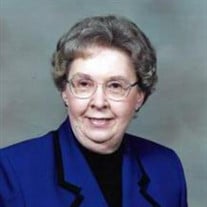 Anna “Ann” Faye Sickler Fees, age 90, of St. Paul, NE, formerly Amherst, NE, passed away on Tuesday, December 22, 2020 at Brookefield Park Skilled Nursing and Rehabilitation in Saint Paul, NE. Mass of Christian Burial will be 10:30 a.m. on Tuesday, December 29, 2020 at St. James Catholic Church in Kearney. Father Joseph K. Joseph will celebrate and burial will be at Kearney Cemetery. Visitation will be from 4:00 p.m. – 6:00 p.m. followed by a Rosary at 6:00 p.m. all on Monday, December 28, 2020 at the church. All health requirements will be adhered to, and the city-wide ordinance requiring face coverings and social distancing shall be followed. Memorials are suggested for St. John Capistran Catholic Church or the Alzheimer’s Association. Please visit www.hlmkfuneral.com to leave a tribute or message of condolence. Horner Lieske McBride & Kuhl Funeral and Cremation Services in Kearney are in charge of arrangements. Ann was born October 26, 1930 in Callaway, NE to Earl and Elsie (Havenstine) Sickler. Her family later moved to Kearney where she graduated from Kearney High School. In October 1958, she married Jerome Mathias Fees and moved to a farm north of Miller, NE. They were blessed with four children and resided there until Jerome’s death in 1969. Ann and the family moved to Amherst and she worked for Baldwin Filters from 1970 until her retirement in 1998. Ann was an active member of St. John Capistran Catholic Church in Amherst and the Miller American Legion Auxiliary. She enjoyed her church family, playing pinochle with her friends, and especially loved spending time with her family. In 2018, Ann was diagnosed with Alzheimer’s disease and moved from her home to a care home in Grand Island and later to St. Paul where she lived until her death. She is survived by her children, Gary Fees (Bronwyn) of Manhattan, KS, Cheryl (Eugene) DeVillier of Wellsville, KS, Lori (Shannon) Ready of Grand Island, Craig Fees of Omaha; her grandchildren, Isaac (Emily), Brooke, Hailee, Alexander, Michael, Charles, Catherine, and Kalli; great grandchildren, Savannah and Amos; and many nieces and nephews. She was proceeded in death by her mother in 1943, her father in 1975, husband (Jerome) in 1969, a brother (Robert) in 1959, twin sisters (Doris and Dorothy) in 1929 and 2001 respectively, and her sister (Betty) in 2020.

The family of Anna "Ann" F. Fees created this Life Tributes page to make it easy to share your memories.

Send flowers to the Fees family.