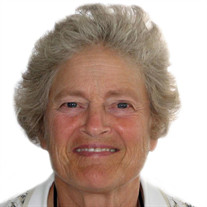 Barbara Nelle (Dill) Beechner died at home on February 27, 2021 in Kearney, Nebraska. She was born July 17, 1935 in Belvidere, Nebraska to her parents Nelle Trumble Dill and Earl (Squire) Dill. Barb is survived by her loving husband of 63 years, Dick Beechner, children Lea Beechner Wylie & John Wylie (Kansas City), Richard “Beech” Beechner II & Connie Meyer (Kearney), Sara Beechner & Mark Aitala (Austin), who loved her vibrancy, kindness, pioneer grit and sense of humor. She’s also survived by her sister, Carol (Dill) Lehmkuhl and grandchildren Mackenzie and Hayden Wylie, Dillon and Kole Aitala. She was a beloved sister-in-law, aunt and cousin to many. Preceding her in death are her parents, her infant son, Richard Dill Beechner, as well as her siblings Jack Dill, Bob Dill, Jean (Dill) Anderson and Jo (Dill) Messman. Barb epitomized the Nebraska state slogan, “The Good Life.” She enjoyed people and was a true friend to everyone she met, including her walking partner/dog KYCE. Barb was a lifelong volunteer to multiple civic, church and cultural organizations. She was an active enthusiast of Nebraska-related literature, art and nature, including the Sandhill cranes migration on the Platte River. Raised on a farm in Belvidere, Nebraska with five older siblings, Barb grew up milking the cows and making deliveries before school. A top student, she graduated from University of Nebraska Medical Center with a Nursing Degree. She worked as school nurse in Lincoln as well as in nursing homes (Lancaster Manor, Mt. Carmel, Good Samaritan Society in Gibbon). She later served as a Hospice volunteer for 25+ years. Barb’s compass was always the golden rule – "Do unto others as you would have them do unto you." And she was willing to give extra, whether a sack of veggies from her garden, a loaned book or a bedside visit to an ailing friend. She enjoyed family reunions and travels with her siblings and their spouses to the Amazon in Peru, France, China, Egypt and Alaska. Barb married Dick Beechner in 1957 and was a faithful supporter of her husband’s career in coaching athletics as they moved the family to cheer on Nebraska Huskers, Hiram Scott Scotties, Missouri Tigers, Washington State Cougars, and UNK Lopers. Barb’s zest for learning and life included serving as a Senior College Board Member, 4H Leader, and membership in P.E.O., book clubs, Sweet Adelines choir and her birthday “Classics.” She loved volunteering at Museum of Nebraska Art (MONA) in Kearney and was an avid supporter of local theatrical productions, including the annual Storytelling conference in Kearney. Due to the pandemic, the family will have a private celebration of Barbara’s life. Barbara has chosen cremation. Memorial contributions to one of the following is preferred: Barbara Dill Beechner University of Nebraska Medical Center College of Nursing - Kearney campus Scholarship (established by the family) Mail checks to: University of Nebraska Foundation, PO Box 2678, Kearney, NE 68848 Electronic donations accepted https://nufoundation.org/fund/01155080 Kearney Area Storytelling Festival Mail checks to: PO Box 473, Kearney, NE 68848 Electronic donations accepted https://www.paypal.com/donate/?hosted_button_id=CQPLW5DX7GLSC

Barbara Nelle (Dill) Beechner died at home on February 27, 2021 in Kearney, Nebraska. She was born July 17, 1935 in Belvidere, Nebraska to her parents Nelle Trumble Dill and Earl (Squire) Dill. Barb is survived by her loving husband of 63 years,... View Obituary & Service Information

The family of Barbara Nelle (Dill) Beechner created this Life Tributes page to make it easy to share your memories.

Send flowers to the Beechner family.