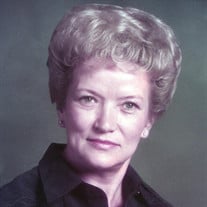 Barbara J. Guzinski, 87, of Kearney, died April 28, 2021 at the Good Samaritan Society - St. John’s in Kearney. Funeral services will be held 10:00 am, May 4, 2021 at Holy Cross Lutheran Church with Pastor Tim Barone officiating. Burial will follow the service at Kearney Cemetery. Visitation will be from 5:00 to 7:00 pm, May 3, 2021 at Horner Lieske McBride & Kuhl Funeral and Cremation Services. Memorials are suggested to Holy Cross Lutheran Church or the Ravenna EMT’s. Born January 27, 1934 in Wayne, Nebraska to James B. Grier Jr. and Thelma S. McClary Grier. Barb moved to Wayne, NE from the family farm when she was in second grade. She attended high school at Wayne Prep graduating in 1951. She worked for Northwestern Bell Telephone Company for 2 ½ years, and then the ASCS office. She married Norman A. Schmidt on May 29, 1955. They moved to Grand Island, NE in September 1957 where their first son Steve was born in 1958. The couple moved to Ord, NE in 1959 opening a Tax Accounting Office. She taught Vacation Bible School for many years. While there, they made several close friendships and had two more children. Scott was born in 1960, Sherri in 1962. In 1968 the family moved to Ravenna, NE and Barb became a full-time mom. They were members of Bethlehem Lutheran Church where she taught catechism, served on the Ravenna School Board and the Ravenna Election Board. In 1979 Norm and Barb moved to Kearney, NE. They were members of Holy Cross Lutheran Church where she was a member of the Ladies Aid. She served 6 years on the Good Samaritan Hospital Foundation Board and as a Hospital Volunteer. Barb attended Kearney State College taking an essential Art Class to further her love of painting in 1981. Norm passed away in 1986. Barb married Elvin Guzinski in 1989 and returned to Ravenna. She spent seven years as Treasurer of Bethlehem Lutheran Church and again served on the Ravenna Election Board until 2014. Her favorite hobbies were oil painting, playing bridge, creating craft items for family and friends, winter trips to Arizona and her monthly luncheons with Kearney friends. She treasured her partnership with Janet Pohlmann in the craft business they started and had for eight years. At the age of 86 Barb learned to use an I-Phone where she became an avid texter and FaceTime user with her family. At the time of her death Barb was an Ambassador at Kinship Pointe Northridge where she lived in Independent living. Barb’s life was centered on her three children, eight grandchildren, and three great grandchildren. Her faith in Christ Jesus helped her through many trials as well as the wealth of blessings she has had in her lifetime. Barb was a friend to many and loved by all. She will be truly missed. Barb is survived by her children Steve Schmidt and wife Carol of Lincoln, NE, Scott Schmidt and wife Colleen of Omaha, NE and Sherri Esterling and husband Randy of Omaha, NE, 8 Grandchildren and 3 Great Grandchildren. Stepchildren David Guzinski of Cairo, NE, Sue Zeller of Ravenna, NE, Timothy Guzinski of Florida, 5 Step Grandchildren and 8 Great Step Grandchildren. Many nieces and nephews in Nebraska, Texas and Massachusetts. Barb was preceded in death by her husband Norm, two sisters, one brother, and husband Elvin.

The family of Barbara J. Guzinski created this Life Tributes page to make it easy to share your memories.

Send flowers to the Guzinski family.