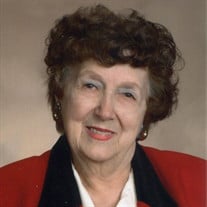 Betty S. (Sitz) King, age 97, of Kearney, passed away Monday, July 6, 2020 at the Good Samaritan Society – St. John’s in Kearney from complications following a stroke. Due to current CDC restrictions, private memorial services will be held on Wednesday, August 12, 2020 at 10:30 a.m. at First Lutheran Church in Kearney. Friends can view the live stream of the memorial service by visiting www.firstlutherankearney.org. There will be no visitation. Memorials are suggested to the Kearney Area Animal Shelter or First Lutheran Church in Kearney. Tributes or messages of condolence can be left at www.hlmkfuneral.com. Horner Lieske McBride & Kuhl Funeral and Cremation Services in Kearney is in charge of arrangements. Betty was born on January 7, 1923 in Kearney, NE to Charles and Anna (Schramm) Sitz. She graduated from Kearney High School in 1940 and received a B.S. degree from Nebraska Wesleyan in 1944. She was proud of being a member of the Gamma Phi Beta Sorority for over 50 years. She married Keith King on August 3, 1946 in Kearney. Betty enjoyed many pursuits and activities with bridge and reading of high importance to her. She was actively involved in community activities especially with the Kearney Area Chamber of Commerce where she was an Envoy for many years. In 1996, Betty and Keith were extremely humbled to receive the “Friend of Kearney” award as this community has been such an important part of their lives. She was a member of First Lutheran Church of Kearney and supported numerous charitable services and organizations in the Kearney community including the Kearney Goodfellows, Habitat for Humanity and the Kearney Area Community Foundation. “I am not afraid of tomorrow, for I have seen yesterday and I love today.” ~ William Allen White She is survived by her five children, Kent King of Kearney, Dr. Denise L. Capek and her husband David of Lincoln, Douglas King and his wife Rhonda of Kearney, Kerry Broz and her husband Robert of Bullhead City, AZ and James King and his wife Brenda of Kearney; grandchildren, Laura King Homan, Karel Capek, Haley Capek Peters, Morgan Capek, Owen King, Mercedes King Powell, Rebecca King Lush, Kristina King Singleterry, Regan Broz and Hunter King; 16 great grandchildren; numerous nieces and nephews and a large contingent of friends new and old. Betty was preceded in death by her parents; husband, Keith A. King; sister, Marjorie King

The family of Betty S. King created this Life Tributes page to make it easy to share your memories.