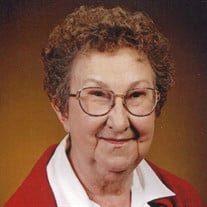 Beverly “Bev” J. Shada, 92, of Kearney died Friday, August 16, 2019 at Mt. Carmel Home and Rehabilitation Center in Kearney. Funeral services will be Tuesday, August 20, 2019 at 10:30 a.m. at St. George Orthodox Church in Kearney. Father Christopher Morris will officiate and burial will be at Kearney Cemetery. Visitation will be Monday from 5:00 – 7:00 p.m. with a Trisagion prayer service to follow at Horner Lieske McBride & Kuhl Funeral Home in Kearney. Memorials are suggested to St. George Orthodox Church, AseraCare Hospice or Angels Way at Mt. Carmel Home. Please visit www.hlmkfuneral.com to leave a tribute or condolence. Horner Lieske McBride & Kuhl Funeral and Cremation Services in Kearney is in charge of arrangements. She was born July 20, 1927 in Miller, NE to Pearl and Wilma (Scranton) Kenney. She grew up in Miller and graduated from Miller High School then attended Kearney Normal School. She worked at the Sears store in Kearney for a couple of years then on March 7, 1953 she married Victor Shada in Grand Island. The couple lived in Kearney where she was a housewife and raised her family. Bev was a member of St. George Orthodox Church where she was involved with the Ladies Society and served as church organist. She belonged to the V.F.W. Auxiliary and did volunteer work for the Red Cross blood drive. She loved to read, crochet, watch soap opera’s and bake. She especially enjoyed being with family and grandchildren and spending time at Johnson Lake. Surviving relatives include daughters, Kristi Korensky and Katie Ramsey and husband Kirk both of Grand Island; son, Tim Shada and wife Tracey of Kearney; grandchildren, Dan Korensky and wife Brittany, Melissa Vodehnal and husband Justin, Kirsten Busse and husband Josh, Kane Ramsey and wife Dani, Megan Shada, Amanda Williamson and husband Zane; great grandchildren, Bailey, Asher, Bennett, Eryn, Clara and Elise; sisters, Kay Moss and husband Bobby of Kearney and Jackie Shada of Grand Island. She was preceded in death by her husband in 2004.

The family of Beverly "Bev" J. Shada created this Life Tributes page to make it easy to share your memories.

Send flowers to the Shada family.