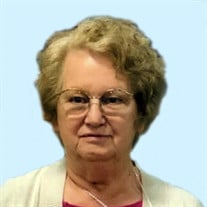 Beverly Joeen (Bundy) Yendra, 81, of Kearney passed away peacefully at her home, Monday, February 1, 2021. A celebration of life service will be at 10:30, Tuesday, February 9, 2021 at the First Baptist Church in Kearney with Pastor Sean Dougherty officiating. Burial will be at Riverside Cemetery in Gibbon. Visitation with the family will be 5:00 p.m. -7:00 p.m. Monday, February 8, 2021 at Horner Lieske McBride Kuhl Funeral Home in Kearney and also 1 hour prior to services at the church on Tuesday. Memorials are suggested to the ALS association. Please visit www.hlmkfuneral.com to leave a tribute or message of condolence. Horner Lieske McBride & Kuhl Funeral and Cremation Services in Kearney is in charge of arrangements. Beverly was born January 11, 1940, in Kearney, Nebraska to Paul and Charlotte (Rowedder) Bundy. She was raised in Gibbon and attended Gibbon Public School where she graduated in 1957. On August 16, 1959, she married Darrell Gene Yendra, and they raised 3 children while residing on the family farm north of Gibbon. She taught in a country school the first fall after graduating high school, and later attended Kearney State College to earn her Bachelors Degree in Education. Following that, she taught three years at a Hall County country school and was a para-professional at Northeast School in Kearney until retiring. Beverly was active in the Baptist Church of Gibbon from infancy to adulthood. She was on the Cradle Roll and at age 12 was baptized. She was active in Sunday School, Vacation Bible School, choir and the Youth Fellowship. She served in office for both the local and association Baptist Youth Fellowship during her teenage years. For 30 years, she taught Sunday school, served as Sunday School Superintendent, nursery committee and was on the Board of Christian Education. Darrell and Bev sold the farm and moved to Kearney in 1982 and began a slightly more leisure life of traveling and enjoying grandchildren. They were often found playing cards with friends, out dancing, and camping in their mobile home. Bev’s passions included reading, quilting, and coffee with friends. However, her pride and joy were her children, grandchildren and great- grandchildren. She often gifted them with quilted items and books. Beverly was a member of First Baptist Church of Kearney, involved with the ABW Circle, charter member of Bits and Pieces Quilt Guild, Pioneer extension club and had been a Docent at Mona Museum in Kearney. Left to cherish her memory are her husband, Darrell Yendra; and children Brian Yendra, Krista (Bruce) Pierce, and Darren (Inga) Yendra; 11 grandchildren Kyla Earll, Brooke Cooley, Brittney Kuck, Timaree Smith, Derek Yendra, Tyson Pierce, Jared Yendra, Trenton Yendra, Tate Pierce, Amanda Colburn and Tessa Yendra, and her precious 18 great-grandchildren. Beverly was preceded in death by an infant daughter, her parents, and grandparents.

Beverly Joeen (Bundy) Yendra, 81, of Kearney passed away peacefully at her home, Monday, February 1, 2021. A celebration of life service will be at 10:30, Tuesday, February 9, 2021 at the First Baptist Church in Kearney with Pastor Sean Dougherty... View Obituary & Service Information

The family of Beverly "Bev" J. Yendra created this Life Tributes page to make it easy to share your memories.

Send flowers to the Yendra family.