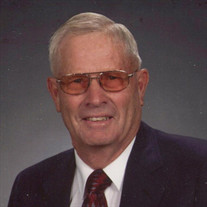 Bob W. Peterson, age 86, of Kearney, passed away Thursday, January 28, 2021 at CHI Health Good Samaritan Hospital in Kearney. Memorial Services will be 10:30 am, February 2, 2021 at First United Methodist Church with Pastor Alan Davis officiating. Burial will follow the service at the Riverdale Cemetery. Visitation will be from 5:00 to 7:00 pm, Monday, February 1, 2021 at Horner Lieske McBride & Kuhl Funeral and Cremation Services with the family present. In lieu of flowers memorials are suggested to the First United Methodist Church or Habitat for Humanity in Kearney. Robert Peterson was born on a farm outside of Elm Creek, Nebraska on July 17, 1934 to Robert and Thelma (Young) Peterson. The family moved to Riverdale, Nebraska when Bob was a young boy. He attended a rural county school west of Riverdale and then attended Riverdale High School where he graduated in 1952. In 1954 he was united in marriage to Loris Pazdernik at the Methodist Church in Riverdale. To this union they had three children Gail, Kim, and Rex. Bob farmed all his life on a farm a mile west of Riverdale Nebraska. He shelled corn from 1957-1968 in a three-county area. He coached the Riverdale little league baseball team for many years, and spent many hours tinkering in his shop. He had a love for antique cars and antique tractors, restoring them in his spare time. He served on many boards in the farm area and also church and cemetery boards. After his retirement he spent many hours volunteering for Habitat for Humanity in the Kearney area. Bob was a lifetime member of the First United Methodist Church. Bob is survived by his wife Loris Peterson; children, Gail (Alan) Kegley of Kearney, Kim (Byron) Kinnan of Lincoln, NE, Rex (Shari) Peterson of Riverdale; grandchildren, Joshua (Karin) Kegley of Elkhorn, Ryan (Emily) Kegley of Kearney, Briar (Wade) Jensen of Colorado Springs, CO, Jordan (Brian) Cochran of Kearney, Zachary Peterson (Jason Soukup) of Lincoln, Cole (Blair) Peterson of Riverdale, Nolan (Kendall) Peterson of Austin, TX; great-grandchildren Hunter Osentowski, Huston, Elle, Hendrex Cochran, Cruz, Drake, and Blaise Peterson, Everett and Henry Kegley, and Connor Kegley; Sister-in-law, Alda Drew and Brother-in-law Alan (Loretta) Pazdernik; many cousins, nieces, and nephews. Bob was proceeded in death by his parents, in-laws Emil and Fern Pazdernik; sisters and brother-in-laws, Janice (Darrel) Reiter, Marilyn (Kenneth) Drew; brother-in-law, Max Drew; and niece Sheree Ott.

The family of Bob W. Peterson created this Life Tributes page to make it easy to share your memories.

Send flowers to the Peterson family.