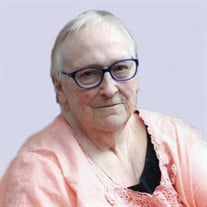 Darlene P. Luce, 84 of Kearney, formerly Pleasanton, passed away on Saturday, May 23, 2020 at Good Samaritan Society – St. John’s in Kearney. Services will be on Friday, May 29, 2020 at 10:30 a.m. at Horner Lieske McBride & Kuhl Funeral and Cremation Services in Kearney. Pastor Seung Park will officiate. Private family burial will be at the Majors Cemetery. Visitation will be on Thursday, May 28, 2020 from 5:00 p.m. – 7:00 p.m. and also 1 hour prior to services on Friday at the funeral home. We will observe the current directed health mandates in place for viewings and funerals. Cards may be sent to the family, care of Horner Lieske McBride & Kuhl – 2421 Avenue A – Kearney, NE 68847. Memorials are suggested to the family, to be designated later. Please visit www.hlmkfuneral.com to leave a tribute, memory or condolence. Horner Lieske McBride & Kuhl Funeral and Cremation Services in Kearney is in charge of arrangements. Darlene was born on March 4, 1936 in Kearney, NE to John and Dorothy (DeVoe) Montgomery. She attended school in Elm Creek and graduated in 1954. She was united in marriage to Victor G. Luce on September 30, 1956 in Elm Creek. The family would later move to the Pleasanton area. Darlene was a member of the Pleasanton United Methodist Church, United Methodist Women, V.F.W. Auxiliary of Ravenna and also the Majors Neighborhood Club. Darlene enjoyed reading, embroidery and playing pitch with her card group. Darlene is survived by her daughter, Carol Bachman and Neil of Humphrey, NE; sons, Larry and Julie Luce of Hastings, NE and Richard and Susan Luce of Ocean Park, WA; daughter in law, Carol and Bruce Uden of Pleasanton, NE; sister, Shirley Wright of Colorado Springs, CO; 9 grandchildren; 4 great grandchildren; sister in laws, Erma Lammers of Ravenna, NE and Loretta Luce of Westminster, CO; many other nieces, nephews, other extended family and friends. She was preceded in death by her parents; husband; son, John Luce; sisters, Tresa Montgomery and Judy Nickman; son-in-law, Jim Bachman

The family of Darlene P. Luce created this Life Tributes page to make it easy to share your memories.

Send flowers to the Luce family.