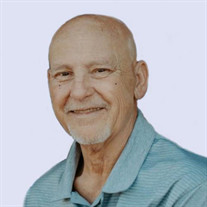 David “Dave” P. Jones, age 65 of Kearney, passed away Sunday, March 28, 2021 at CHI Health – Good Samaritan Hospital in Kearney. Funeral services will be on Tuesday, April 6, 2021 at 10:30 a.m. at Kearney E-Free Church. Rev. Brian Klein will officiate and burial will be at Kearney Cemetery. Visitation will be on Monday, April 5, 2021 from 4:00 p.m. – 6:00 p.m. at the funeral home and also 1 hour prior to services at the church on Tuesday. Memorials are suggested to the family, to establish a memorial in Dave’s memory at Meadowlark Hills Golf Course. Online condolences may be submitted by visiting www.hlmkfuneral.com. Horner Lieske McBride & Kuhl Funeral and Cremation Services in Kearney is in charge of arrangements. Dave was born on July 16, 1955 in Lexington, NE to Helen (Snider) Brandorff. He was adopted by his step-father, Carl “Dee” Jones, when he was 10 years old. He grew up on a farm north of Amherst, NE and attended Watertown country school. He enjoyed hunting, fishing, football, basketball and baseball. In 1973, he graduated from Sumner, Eddyville, Miller High School where he excelled at football. After high school Dave continued his love for football at Kearney State College where he attended for one year. On December 6, 1974, he married Diana Gibbons. They welcomed three children, Kristopher David in 1982, Stefanie Lee in 1984 and Lucas Daniel in 1986. Dave worked in commercial construction and then residential construction where he developed his skill as a finish carpenter. In 1980, he began his 30 year career at Eaton Corporation where he worked in maintenance and special projects. Dave was a member of the Eaton Fire Brigade and retired in 2010. Shortly after his retirement, Dave and Diana bought a cabin at Harlan Lake where they spent time with old friends, made new friends, and of course enjoyed precious family time boating, fishing and swimming. Many of the family memories are centered around Dave’s love for family time, the outdoors and sports. He was a longtime member of Meadowlark Hills Golf Course and was especially proud of his hole in one and double eagle. He was known for his solid work ethic, craftsmanship, quick sense of humor and the ability to find a golf ball in the rough. Dave was always surrounded by friends and family and he loved with his whole heart. This was even more evident over the last eight years as his seven grandchildren came into the family. Surviving relatives include his wife, Diana Jones of Kearney; children and spouses, Kris Jones and wife Bridget of Elm Creek, NE, Stef Roper and husband Matt Roper of Kearney, Luke Jones and wife Kael of Colorado Springs, CO, brother, Dan Jones of Broken Bow; Sister-in-Law, Kathy Shaffer and husband Glen of San Antonio, TX; and Brother-in- Law, Dan Gibbons and wife Carol of Desert Hot Springs, CA; seven grandchildren, Sailor, Hayden, Brooks, Savanna, Cannon, Briggs, and Maverick; and numerous nieces and nephews. Dave was preceded in death by his Mother, Helen Jones; Adoptive Father, Carl ‘Dee’ Jones; Biological Father, George Brandorff; Father-in-Law, Dennis G. Gibbons; Mother-in-Law, Jean (Gibbons) Deke; and Sister-in-Law, Sheri Jones.

The family of David "Dave" P. Jones created this Life Tributes page to make it easy to share your memories.