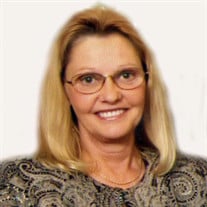 Debra K. Marlatt, 65, of Odessa, died Thursday, May 30, 2019 at Mt. Carmel Home and Rehabilitation Center in Kearney. Funeral services will be Wednesday, June 5, 2019 at 10:30 a.m. at Living Faith Fellowship Church in Kearney with Pastor Jim Wilson officiating. Burial will follow the service at Prairie Center Cemetery at Havens Chapel, north of Kearney. Visitation will be Tuesday from 5:00 - 7:00 p.m. and one hour prior to the service at the church. Memorials are suggested to the family to be designated later. Deb was born February 20, 1954 in Kearney to Edward and Violet (Krueger) Geiger. She graduated from Kearney High School in 1972. Deb worked in the office for Anderson Bros Electric Plumbing & Heating and Warren-T Plumbing in Kearney. Deb married Allan Marlatt on December 20, 1996 in Norton Kansas. They lived in Odessa. Deb enjoyed spending time with her family and friends. She also loved her dogs. Deb is survived by her son, Jeremy Fisher and his girlfriend Dawny Boutin of Omaha, NE; brothers, Butch Geiger and wife Carol of Kearney, NE, Danny Geiger of Seward, NE, Doug Geiger of Lincoln, NE; sister, Bonnie West of Axtell, NE; brother-in-law, Bob Grassmeyer of Riverdale, NE, a number of nieces and nephews, and many friends, including Susan Losey and Jim Wilson. Deb was preceded in death by her sister, Linda Grassmeyer and brother-in-law, Doren “Red” West.

The family of Debra K. Marlatt created this Life Tributes page to make it easy to share your memories.

Send flowers to the Marlatt family.